Stress peptide and receptor may have role in diabetes

Stress peptide and receptor may have role in diabetes

LA JOLLA, CA—The neuropeptide corticotropin-releasing factor (CRF) makes cameo appearances throughout the body, but its leading role is as the opening act in the stress response, jump-starting the process along the hypothalamus-pituitary-adrenal (HPA) axis. Researchers at the Salk Institute for Biological Studies have found that CRF also plays a part in the pancreas, where it increases insulin secretion and promotes the division of the insulin-producing beta cells.

These findings, which will be published in this week’s edition of the Proceedings of the National Academy of Sciences, may provide new insights into diabetes, particularly type 1, as well as suggest novel targets for drug intervention.

The pancreas is both an exocrine gland, producing enzymes that are secreted into the gut to help digest food, and an endocrine gland, secreting a cocktail of hormones, including insulin, which is manufactured by beta cells that reside in endocrine islets within the “sea” of exocrine tissue.

Plasma glucose increases after a meal, and, in healthy people, insulin is secreted to instruct the body to take up the glucose and store it in the liver or muscles to bring blood glucose levels down. In diabetes, the glucose metabolism is misregulated: In type 1 diabetes, the immune system attacks the beta cells, which then are unable to produce sufficient insulin. In type 2 diabetes, the most prevalent form of the condition, patients have sufficient beta cells, which still secrete insulin, but the body is unable to respond correctly, and plasma glucose remains constantly elevated. 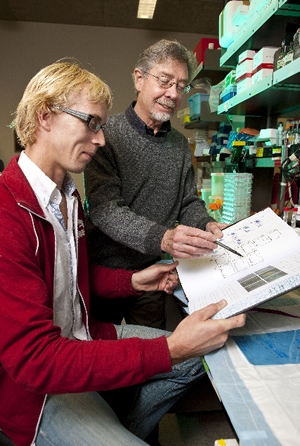 CRF, in concert with its receptor, CRFR1, has long been known as key to the body’s response to various forms of stress, but the pair is also involved in many more processes, including a number with direct ties to metabolism. As early as the 1980s, studies had suggested that pancreas cells can respond to CRF, but the few limited observations did not demonstrate the nature of the response or which cells or receptors were involved.

Prompted by evidence suggesting that CRF has an effect on beta cells, a team led by first author Mark O. Huising, Ph.D., and senior author Wylie Vale, a professor and head of the Salk Institute’s Clayton Foundation Laboratories for Peptide Biology and holder of the Helen McLoraine Chair in Molecular Neurobiology, sought to verify that effect and determine its underlying mechanism. Working with cell lines, pancreatic islets from mice and human donors, as well as mouse models, Vale’s lab, which discovered CRF in the early 1980s, conducted a series of experiments that collectively demonstrated the presence and actions of CRFR1 in the islets.

“We found that beta cells in the pancreas actually express the CRFR1 receptor,” explains Huising, a postdoctoral fellow in the Clayton Foundation Laboratories. “And once we had established the presence of CRFR1 in the islet, we started filling in the blanks, trying to learn as much about pancreatic CRFR1 as we could.”

What they discovered was that beta cells exposed to CRF, one of the peptides that activate the CRFR1 receptor, can respond in at least two ways. First, they increase their secretion of insulin if they simultaneously encounter high levels of glucose. The higher the levels of glucose, the more insulin they release in response to CRF and the more rapidly blood levels of glucose are reduced.

Working in collaboration with a group at the Panum Institute in Copenhagen, the researchers went on to establish that beta cells exposed to CRF also activate the MAPK pathway, which is a key pathway implicated in beta cell division. Mature, differentiated beta cells can divide, albeit slowly, but if they are exposed to a molecule that will activate the CRFR1 receptor, they will start to divide somewhat more rapidly, which is especially relevant in the context of type 1 diabetes.

“The thinking is that type 1 diabetic patients usually have a few beta cells left in their pancreas, so those remaining beta cells, though not enough to control glucose levels, may seed a population of regenerating beta cells,” Huising says.

While a few gut peptides termed incretins, which are currently used to increase insulin secretion in patients, have also been shown to accelerate beta cell division, the Vale group’s findings suggest an incretin-like effect for a peptide normally associated with the stress response.

“Anything we can find out that will drive proliferation or the division of beta cells is very interesting, and being able to stimulate beta cells to divide a little faster may be part of a solution that may ultimately, hopefully, allow management of type 1 diabetes,” Vale says. “But because it is an autoimmune condition, making the cells divide won’t be enough. That is why researchers are working hard to solve the problem of destruction of beta cells.”

These results emphasize the complexity of metabolic disorders and identify novel targets to treat diabetes and obesity. One of the key questions remaining for Vale and his group is under what conditions the pancreatic CRFR1 system is utilized and gets activated.

“We know what it can do, but we don’t fully understand the physiological circumstances under which it does it,” Vale says. “This receptor appears to be important within the pancreas. What we haven’t determined, though, is whether this is a stress-linked phenomenon because we still have questions regarding the source of the hormone that acts on pancreatic CRFR1. We would like to know where it is coming from to determine if it is released in stressful conditions to bring about the effects we observed.”

This work was partly supported by grants from the National Institute of Diabetes and Digestive and Kidney Diseases, the Juvenile Diabetes Research Foundation, the Clayton Medical Research Foundation, Inc., and the Leona M. & Harry B. Helmsley Charitable Trust. Researchers who also contributed to the work include Talitha van der Meulen, Joan M. Vaughan, Masahito Matsumoto, Cynthia J. Donaldson, and Hannah Park of the Salk Institute, and Nils Billestrup of the Panum Institute, University of Copenhagen, Denmark.