La Jolla, CA—A newly identified molecular pathway that directs stem cells to produce glial cells yields insights into the neurobiology of Down’s syndrome and a number of central nervous system disorders characterized by too many glial cells, according to a recent study by researchers at the Salk Institute for Biological Studies.

Their findings, to be published in the March 13 online edition of Cell Death and Differentiation, indicate that synaptojanin-1, a central component of the pathway, is essential to production of glia, brain cells that act as neurons’ personal assistants. Down’s syndrome, spinal cord injury, Alzheimer’s disease, and stroke all are linked by an overproduction of glia. Understanding this molecular pathway may also have implications for the onset of glioblastoma, the most common and malignant type of brain tumor. 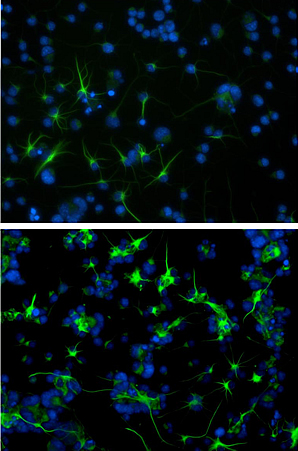 With the relevance of glia to human central nervous system function and pathology already widely accepted, Salk professor David Schubert, who heads the Cellular Neurobiology Laboratory, observes: “The discovery of this molecular signaling pathway promises to completely change the way we think about central nervous system maladies, allowing the development of drugs that inhibit glial proliferation and improve the prognosis of patients with a host of devastating conditions.”

Down’s syndrome is the most frequent cause of mental retardation, with an incidence of 1 of every 800 births. Cognitive deficits, as well as changes in the basic composition of the brain, are observed soon after birth, reflecting problems in brain development. Although it is known that Down’s syndrome is caused by an extra copy of chromosome 21, the exact genetic details largely remain a mystery.

Among the established anomalies found in the brains of Down’s syndrome patients are a greater than normal number of glial cells and perhaps fewer nerve cells. The reason for these characteristics has been unclear, however. Using a new mass spectrometry technique and stem cells that can be made to produce either neurons or glia, a team of Salk researchers led by first author Federico Herrera, Ph.D., a senior scientist in the Cellular Neurobiology Laboratory, identified a molecular signaling pathway that is required for the production of glial cells.

He and his colleagues then sought to determine whether the pathway was more active in Down’s syndrome patients and a mouse model of the condition. What they found was that the level of a protein called synaptojanin-1, which is encoded in chromosome 21, is much higher in both and is strongly correlated with a greater number of glial cells.

“Given the required balance between the numbers of neurons and glia in a normal brain, an excess of glia may contribute to the cognitive deficits that characterize Down’s syndrome,” says Herrera. The team also found that Synaptojanin-1 was not required for the production of neurons, and they identified the particular part of the Synaptojanin-1 molecule that was responsible for generating glia. “This is a critical first step to identifying drugs that specifically block the excess proliferation of glial cells associated with Down’s syndrome and perhaps promote the production of more neurons,” Herrera adds.

Furthermore, the medical implications of this discovery extend beyond Down’s syndrome. According to Schubert, a surplus of glial cells is detrimental to the regeneration of nerves following spinal injury. “It is thought that the aberrant accumulation of glial cells around the site of spinal injury, the so-called glial scar, actively inhibits nerve regeneration,” he says.

Increased production of glial cells is frequently seen in other conditions as well, including stroke and neurodegenerative disorders such as Alzheimer’s disease, and may contribute to the brain damage associated with them. Interestingly, a large proportion of Down’s syndrome patients develop Alzheimer’s disease at a young age, and Herrera believes that a higher proportion of glial cells could be a contributing factor.

Abnormal production of glia is also implicated in glioblastoma, the most common and malignant of brain tumors, which is thought to be caused by the inappropriate generation of glia from brain stem cells. While normal glia only proliferate when the brain suffers some kind of injury, the defective glia found in glioblastomas proliferate spontaneously. “In this case, our findings could be used to transform tumor cells into normal glia,” says Herrera.

The study was funded with support from the Bundy Foundation, the Shiley Trust for Alzheimer’s Research, and a fellowship for stem cell research from the Instituto de Salud Carlos III.

In addition to Hererra and Schubert, senior scientists Qi Chen, Ph.D., and Pamela Maher, Ph.D., of the Cellular Neurobiology group, and Wolfgang Fischer, Ph.D., in the Salk Peptide Biology laboratory, contributed to the research.