LA JOLLA–Healthy brain, muscle, eye and heart cells would improve the lives of tens of thousands of people around the world with debilitating mitochondrial diseases. Now, researchers at the Salk Institute have gotten one step closer to making such cures a reality: they’ve turned cells from patients into healthy, mutation-free stem cells that can then become any cell type. The new approach is described July 15, 2015 in Nature.

“Right now, there are no cures for mitochondrial diseases,” says senior author Juan Carlos Izpisua Belmonte, professor in Salk’s Gene Expression Laboratory. “Very recently, we’ve developed ways to prevent these diseases, so it was natural to next ask how we could treat them.”

Mitochondrial diseases are caused by any of about 200 mutations that affect the genes of mitochondria, tiny powerhouses inside nearly every cell of the body. Depending on the affected genes and cell types, the diseases can cause muscle weakness, liver disease, diabetes, seizures, developmental delays or vision problems. Existing therapies aim to ease the symptoms or slow the progression of the diseases, but can’t entirely cure them.

In their new work, Belmonte and collaborators from around the world collected skin samples from patients with mitochondrial encephalomyopathy or Leigh Syndrome, both severe disorders that affect the brain and muscles.

The teams began by using current standard protocols to derive pluripotent stem cells from the skin cells, a process that resets the cells to their most basic state. 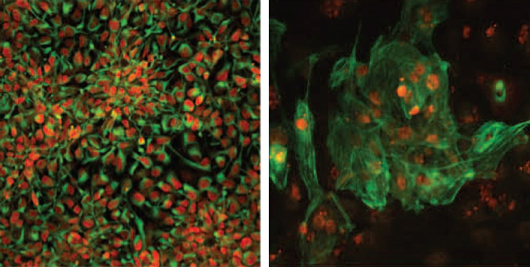 Salk researchers have generated disease-free stem cells from patients with mitochondrial disease that can be converted into any cell type including neuronal progenitors (left) or heart cells (right). These could potentially be used for future transplantation into patients.

“During the process of stem cell generation, you spontaneously get different types of clones,” says Alejandro Ocampo, a research associate in Izpisua Belmonte’s lab and one of the authors of the new paper. If the patient cells have an initial mix of healthy and diseased mitochondria, healthy and diseased stem cells will be generated. Then, the stem cells with healthy mitochondria can be picked out.

For some patients, though, this straightforward approach doesn’t work; their cells don’t have enough–or any–healthy mitochondria to start with.

So the team came up with a second approach: move the nucleus of the patient’s skin cells, which contains most of their genes, into a donor egg cell with healthy mitochondria. Then, use the new egg cell to generate pluripotent stem cells. When the researchers did this, they found the healthy mitochondria took over, and healthy, genetically similar cells from the patient were successfully generated.

“In either case, the idea is that we have healthy stem cells, and we know how to convert pluripotent stem cells into different cell types,” says Jun Wu, an author of the paper and research associate in Izpisua Belmonte’s lab. “They have the potential to give rise to every cell type in the body.”

For now, that means that researchers can use the healthy cells to generate heart, brain, muscle or eye cells from the mutation-free stem cells. But methods to make those cells fully mature and functional and transplant them into patients are still under development.

The work was supported by the G. Harold and Leila Y. Mathers Charitable Foundation and the Leona M. and Harry B. Helmsley Charitable Trust.

Metabolic rescue in pluripotent cells from patients with mtDNA disease