Which came first: the stem cell or the niche?

Which came first: the stem cell or the niche?

La Jolla, CA – Logic says it has to be the niche. As air and water preceded life, so the niche, that hospitable environment that shelters adult stem cells in many tissues and provides factors necessary to keep them young and vital, must have emerged before its stem cell dependents. 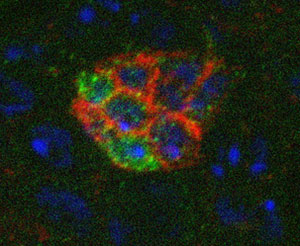 The hub cells found at the tip of Drosophila testis are outlined with DE-cadherin (shown in red). A lineage tracing strategy, which labels somatic stem cells and their offspring with a green flourescent marker, revealed that these cells are direct descendants of somatic stem cells.

A team of scientists at the Salk Institute for Biological Studies led by Leanne Jones, Ph.D., assistant professor in the Laboratory of Genetics, now suggests that this is not always the case. They report in the July 20 advance online edition of the journal Nature that the cells that comprise a specialized niche in the testis of fruit flies actually emerge from adult stem cells, a finding with implications for regenerative medicine, aging research, and cancer therapeutics.

Previously, investigators thought that a fruit fly’s allotment of testis niche cells was handed out at birth and meant to last a lifetime. “What this paper demonstrates is that once a fly becomes an adult, some stem cells that function in spermatogenesis start making the very cells that support them,” said Jones. “Once a fly develops into an adult, some of these niche cells can be replaced.”

Using microscopy and fluorescent markers enabling them to image specific cell types over time, Jones’ group, led by first author Justin Voog, actually caught a testis stem cell population in the act of turning into their own niche, known in the fly testis as the hub.

“We used a detailed lineage tracing strategy to differentiate between single somatic stem cells (SSCs) and hub cells,” said Voog, an M.D./Ph.D. student in Jones’ lab. The hub contains approximately 10 cells that secrete factors promoting self-renewal of two neighboring stem cell populations – germline stem cells, which become sperm, and SSCs, which develop into a structure that encapsulates maturing sperm. “We tracked cells over a period of days and saw that SSCs can generate not only other immature SSCs but their niche support cells,” said Voog. By contrast, germline stem cells appeared incapable of generating hub cells.

Their study also explores the molecular basis of stem cell/niche interactions. “SSCs in the testis look similar to hub cells,” explained Jones. “Both cell types express many of the same proteins.” The team experimentally decreased levels of one of those – a sticky surface protein called DE-cadherin that likely allows stem cells to latch on to the support hub – but only in somatic stem cells. When they did so, DE-cadherin expression on hub cells also decreased, providing further circumstantial support for the idea that hub cells emerge from SSCs.

“Stem cell biology is a fast-moving field and insights from model organisms like Drosophila provide great insight into how stem cell behavior is regulated,” said Voog. “The architecture of the fruit fly testis makes it an ideal system to address questions about what regulates stem cell interactions within the niche.”

Jones agrees, noting that spermatogenesis is also a great system to manipulate experimentally. “Spermatogenesis is less complex than stem cell systems that give rise to multiple cell types, such as blood stem cells,” she said. “Only one cell type emerges from the process-sperm-so if something goes wrong with the system it is readily apparent: you won’t form any sperm.”

According to Jones, mammalian stem cell niches are not so well characterized. Although their whereabouts in tissues like brain or bone marrow is known, how niche compartments relate to their respective neural or blood stem cell charges is an open question.

Issues raised by this study will have to be addressed in humans before good stem cells are exploited or bad ones are eradicated. Will stem cells transplanted in proposed regeneration therapies establish their own support crew or will a “niche transplant” be required to maintain them?

Or, do so-called cancer stem cells, which are thought to form the root of most tumors, create a structure analogous to the niche, and if they do, could it be targeted as anti-cancer therapy?

Jones says the onus is now on mammalian stem biologists to answer these questions. “In mammals the field is still at the point of identifying a stem cell, which precedes characterizing the cells that support them,” said Jones. “In our system we can definitively say that some stem cells can create a microenvironment that enables them to survive. If I had to say whether similar processes occur mammalian cells, I’d guess yes.”

The study was supported by funding from the G. Harold and Leila Y. Mathers Charitable Foundation, the American Cancer Society, the California Institute for Regenerative Medicine, and the NIH.

Also contributing to this study from the Jones lab was Cecilia D’Alterio.