Speeding up drug discovery with rapid 3D mapping of proteins

Salk scientists develop new technique for solving the structure of most popular targets for half of all drugs, potentially aiding discovery of new therapeutics

Speeding up drug discovery with rapid 3D mapping of proteins

Salk scientists develop new technique for solving the structure of most popular targets for half of all drugs, potentially aiding discovery of new therapeutics

LA JOLLA, CA—A new method for rapidly solving the three-dimensional structures of a special group of proteins, known as integral membrane proteins, may speed drug discovery by providing scientists with precise targets for new therapies, according to a paper published May 20 in Nature Methods.

The technique, developed by scientists at the Salk Institute for Biological Studies, provides a shortcut for determining the structure of human integral membrane proteins (hIMPs), molecules found on the surface of cells that serve as the targets for about half of all current drugs.

Knowing the exact three-dimensional shape of hIMPs allows drug developers to understand the precise biochemical mechanisms by which current drugs work and to develop new drugs that target the proteins. 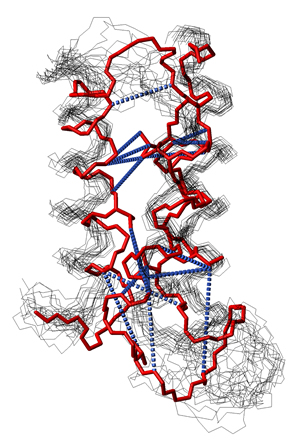 “Our cells contain around 8,000 of these proteins, but structural biologists have known the three-dimensional structure of only 30 hIMPs reported by the entire field over many years,” says Senyon Choe, a professor in Salk’s Structural Biology Laboratory and lead author on the paper. “We solved six more in a matter of months using this new technique. The very limited information on the shape of human membrane proteins hampers structure-driven drug design, but our method should help address this by dramatically increasing the library of known hIMP structures.”

Integral membrane proteins are attached to the membrane surrounding each cell, serving as gateways for absorbing nutrients, hormones and drugs, removing waste products, and allowing cells to communicate with their environment. Many diseases, including Alzheimer’s, heart disease and cancer have been linked to malfunctioning hIMPs, and many drugs, ranging from aspirin to schizophrenia medications, target these proteins.

Most of the existing drugs were discovered through brute force methods that required screening thousands of potential molecules in laboratory studies to determine if they had a therapeutic effect. Given a blueprint of the 3D structure of a hIMP involved in a specific disease, however, drug developers could focus only on molecules that are most likely to interact with the target hIMP, saving time and expense.

In the past, it was extremely difficult to solve the structure of hIMPs, due to the difficulty of harvesting them from cells and the difficulty of labeling the amino acids that compose the proteins, a key step in determining their three-dimensional configuration.

“One problem was that hIMPs serve many functions in a cell, so if you tried to engineer cells with many copies of the proteins on their membrane, they would die before you could harvest the hIMPs,” says Christian Klammt, a postdoctoral researcher in Choe’s lab and a first author on the paper.

To get around this, the scientists created an outside-the-cell environment, called cell-free expression system, to synthesize the proteins. They used a plexiglass chamber that contained all the biochemical elements necessary to manufacture hIMPs as if they were inside the cell. This system provided the researchers with enough of the proteins to conduct structural analysis. 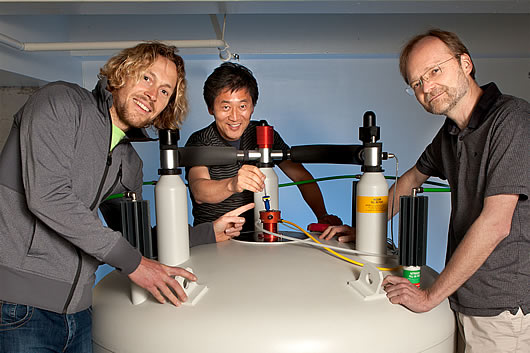 The cell-free method also allowed them to easily add labeled amino acids into the biochemical stew, which were then incorporated into the proteins. These amino acids gave off telltale structural clues when analyzed with nuclear magnetic resonance spectroscopy, a method for using the magnetic properties of atoms to determine a molecule’s physical and chemical properties.

“It was very difficult and inefficient to introduce labeled amino acids selectively into the protein produced in live cells,” says Innokentiy Maslennikov, a Salk staff scientist and co-first author on the paper. “With a cell-free system, we can precisely control what amino acids are available for protein production, giving us isotope-labeled hIMPs in large quantities. Using a proprietary labeling strategy we devised a means to minimize the number of samples to prepare.”

Prior methods might take up to a year to determine a single protein structure, but using their new method, the Salk scientists determined the structure of six hIMPs within just 18 months. They have already identified 38 more hIMPs that are suitable for analysis with their technique, and expect it will be used to solve the structure for many more.

Paul Slesinger, an associate professor in Salk’s Clayton Foundation Laboratories for Peptide Biology, contributed to the research, as did scientists at the Joint Center for Biosciences in Korea, ETH Zurich in Switzerland and the University of California San Francisco.

The research was supported by the World Class University Program and the National Institutes of Health.