Smoke signals: How burning plants tell seeds to rise from the ashes

Smoke signals: How burning plants tell seeds to rise from the ashes

LA JOLLA, CA—In the spring following a forest fire, trees that survived the blaze explode in new growth and plants sprout in abundance from the scorched earth. For centuries, it was a mystery how seeds, some long dormant in the soil, knew to push through the ashes to regenerate the burned forest.

In the April 23, 2013 early online edition of the Proceedings of the National Academy of Sciences (PNAS), scientists at the Salk Institute and the University of California, San Diego, report the results of a study that answers this fundamental “circle of life” question in plant ecology. In addition to explaining how fires lead to regeneration of forests and grasslands, their findings may aid in the development of plant varieties that help maintain and restore ecosystems that support all human societies.

“This is a very important and fundamental process of ecosystem renewal around the planet that we really didn’t understand,” says co-senior investigator Joseph P. Noel, professor and director of Salk’s Jack H. Skirball Center for Chemical Biology and Proteomics. “Now we know the molecular triggers for how it occurs.”

Noel’s co-senior investigator on the project, Joanne Chory, professor and director of Salk’s Plant Molecular and Cellular Biology Laboratory, says the team found the molecular “wake-up call” for burned forests. “What we discovered,” she says, “is how a dying plant generates a chemical message for the next generation, telling dormant seeds it’s time to sprout.” 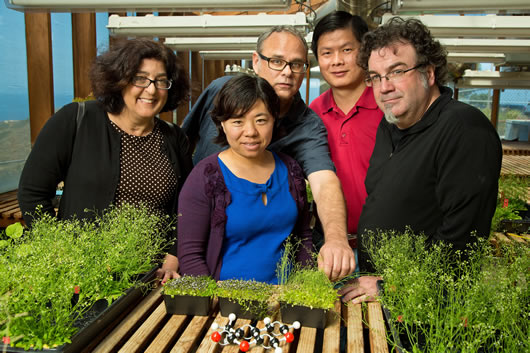 While controlled burns are common today, they weren’t 50 years ago. The U.S. park service actively suppressed forest fires until they realized that the practice left the soil of mature forests lacking important minerals and chemicals. This created an intensely competitive environment that was ultimately detrimental to the entire forest ecosystem.

“When Yellowstone National Park was allowed to burn in 1988, many people felt that it would never be restored to its former beauty,” says James J. La Clair, a researcher from the Department of Chemistry and Biochemistry at the University of California who worked on the project. “But by the following spring, when the rains arrived, there was a burst of flowering plants amid the nutrient-rich ash and charred ground.”

In previous studies, scientists had discovered that special chemicals known as karrikins are created as trees and shrubs burn during a forest fire and remain in the soil after the fire, ensuring the forest will regenerate.

The Salk scientists’ new study sought to uncover exactly how karrikins stimulate new plant growth. First, the researchers determined the structure of a plant protein know as KAI2, which binds to karrikin in dormant seeds. Then, comparing the karrikin-bound KAI2 protein to the structure of an unbound KAI2 protein allowed the researchers to speculate how KAI2 allows a seed to perceive karrikin in its environment.

The chemical structures the team solved revealed all the molecular contacts between karrikin and KAI2, according to Salk research associate Yongxia Guo, a structural enzymologist and one of the study’s lead investigators. “But, more than that,” Gou says, “we also now know that when karrikin binds to the KAI2 protein it causes a change in its shape.”

The studies’ other lead investigator, Salk research associate and plant geneticist Zuyu Zheng, says this karrikin-induced shape change may send a new signal to other proteins in the seeds. “These other protein players,” he says, “together with karrikin and KAI2, generate the signal causing seed germination at the right place and time after a wildfire.”

Guo and Zheng, a married couple working as postdoctoral researchers in the Noel and Chory labs, respectively, came up with the idea for the study while talking over dinner. La Clair then joined the study, contributing his chemistry expertise.
While the new findings were made in Arabidopsis, a model organism that many plant researchers study, the scientists say the same karrikin-KAI2 regeneration strategy is undoubtedly found in many plant species.

“In plants, one member of this family of enzymes has been recruited somehow through natural selection to bind to this molecule in smoke and ash and generate this signal,” says Noel, holder of Salk’s Arthur and Julie Woodrow Chair and a Howard Hughes Medical Institute investigator. “KAI2 likely evolved when plant ecosystems started to flourish on the terrestrial earth and fire became a very important part of ecosystems to free up nutrients locked up in dying and dead plants.”

More research is needed to understand exactly how the change in shape of the KAI2 protein activates a genetic pathway that regulates germination, says Chory, the Howard H. and Maryam R. Newman Chair in Plant Biology and a Howard Hughes Medical Institute investigator. “But this finding is an absolutely critical step in understanding this genetic program and how plant ecosystems, forests and grasslands renew themselves.”

The work was supported by the National Institutes of Health grants 5R01GM52413 and GM094428, National Science Foundation awards EEC-0813570 and MCB-0645794 and the Howard Hughes Medical Institute.