Through Skype, elementary school students can ask world-renown Salk scientists broad questions about science, specific inquiries into their research, and anything else about working in the field of science. The goal of the project is not to teach science content, but to let students meet and interact with scientists so they can picture themselves in similar roles someday. By allowing students to directly interact with scientists, SciChat provides the next generation with insight and knowledge about the importance of science, and potentially even encourages students to pursue a field of science themselves.

“We are thrilled to have this new opportunity for young students to meet and talk with our scientists,” says Ellen Potter, PhD and part of the Salk Education Outreach team. “We are now able to bring the Salk to the students when the students can’t come to us. It is a great way to extend our outreach and share our excitement for scientific discovery.”

Del Mar Hills science teacher, Nancy Swanberg, is excited for the opportunity. “This is a chance for our students to discover that even world-class scientists are accessible and they do important, interesting work,” she says. “When students see scientists in their labs, they can picture themselves in the research environment.” 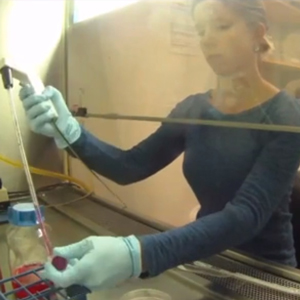 Dr. Abby Buchwalter, scientist in the Molecular and Cell Biology Laboratory at Salk, showed a video presenting her work to 27 students for the first SciChat on Feburary 11, 2014. Students then came up to the camera one at a time to ask her questions on the research.

The first chat launched on Feb 11, 2014 with Dr. Abby Buchwalter, postdoctoral fellow in Martin Hetzer’s Molecular and Cell Biology Laboratory at Salk, describing her research on the nucleus to 27 fourth, fifth and sixth grade students during their lunch break. A total of eight SciChats are scheduled until June 2014, with a plan to continue into the next academic year. The enthusiasm has grown among the students and more than 37 students joined the last chat March 11 (almost 30 percent of the upper grade student body at Del Mar Hills).

At the conclusion of each SciChat, students rate the scientist’s interaction using an electronic survey on their Chromebooks. The scientist with the highest rating this year will be invited to Del Mar Hills to give an evening presentation and answer questions from students and their parents.

The effort is a collaboration between the Salk Institute and the Del Mar Hills Academy of Arts and Sciences. SciChat was spearheaded at the Salk by Potter, Salk Education Outreach colleague Dona Mapston and Buchwalter, and at Del Mar Hills by Swanberg along with Mike Casey, Del Mar Union School District Technology Director.