Scientists take a giant step for people - with plants!

Scientists take a giant step for people – with plants!

La Jolla—Science usually progresses in small steps, but on rare occasions, a new combination of research expertise and cutting-edge technology produces a ‘great leap forward.’ An international team of scientists, whose senior investigators include Salk Institute plant biologist Joseph Ecker, report one such leap in the July 29, 2011 issue of Science. They describe their mapping and early analyses of thousands of protein-to-protein interactions within the cells of Arabidopsis thaliana -a variety of mustard plant that is to plant biology what the lab mouse is to human biology.

“With this one study we managed to double the plant protein-interaction data that are available to scientists,” says Ecker, a professor in the Plant Molecular and Cellular Biology Laboratory. “These data along with data from future ‘interactome’ mapping studies like this one should enable biologists to make agricultural plants more resistant to drought and diseases, more nutritious, and generally more useful to mankind.” 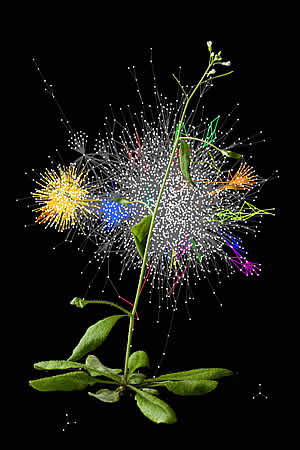 The image shows an Arabidopsis plant overlaid on a network map of protein-protein interactions. The clusters of colors represent “communities” of interacting proteins that are enriched in specific plant processes.

The four-year project was funded by an $8 million National Science Foundation grant, and was headed by Marc Vidal, Pascal Braun, David Hill and colleagues at the Dana Farber Cancer Institute in Boston; and Ecker at the Salk Institute. “It was a natural collaboration,” says Vidal, “because Joe and his colleagues at the Salk Institute had already sequenced the Arabidopsis genome and had cloned many of the protein-coding genes, whereas on our side at the Dana Farber Institute we had experience in making these protein interaction maps for other organisms such as yeast.”

In the initial stages of the project, members of Ecker’s lab led by research technician Mary Galli converted most of their accumulated library of Arabidopsis protein-coding gene clones into a form useful for protein-interaction tests. “For this project, over 10,000 ‘open reading frame’ clones were converted and sequence verified in preparation for protein interaction screening,” says Galli.

Vidal, Braun, Hill and their colleagues systematically ran these open reading frames through a high quality protein-interaction screening process, based on a test known as the yeast two-hybrid screen. Out of more than forty million possible pair combinations, they found a total of 6,205 Arabidopsis protein- protein interactions, involving 2,774 individual proteins. The researchers confirmed the high quality of these data, for example by showing their overlap with protein interaction data from past studies.

The new map of 6,205 protein partnerings represents only about two percent of the full protein- protein “interactome” for Arabidopsis, since the screening test covered only a third of all Arabidopsis proteins, and wasn’t sensitive enough to detect many weaker protein interactions. “There will be larger maps after this one,” says Ecker.

Even as a preliminary step, though, the new map is clearly useful. The researchers were able to sort the protein interaction pairs they found into functional groups, revealing networks and “communities” of proteins that work together. “There had been very little information, for example, on how plant hormone signaling pathways communicate with one another,” says Ecker. “But in this study we were able to find a number of intriguing links between these pathways.”

A further analysis of their map provided new insight into plant evolution. Ecker and colleagues Arabidopsis genome data, reported a decade ago, had revealed that plants randomly duplicate their genes to a much greater extent than animals do. These gene duplication events apparently give plants some of the genetic versatility they need to stay adapted to shifting environments. In this study, the researchers found 1900 pairs of their mapped proteins that appeared to be the products of ancient gene-duplication events. 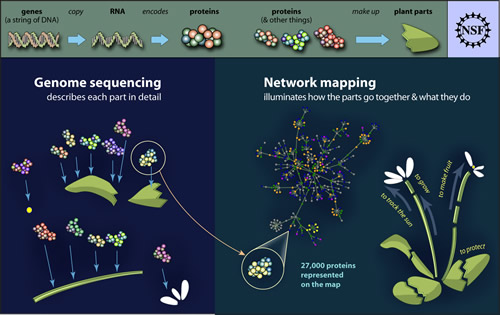 Researchers have created an interaction network map for the plant Arabidopsis thaliana, illuminating protein-protein relationships and doubling the knowledge that existed previously.

Using advanced genomic dating techniques, the researchers were able to gauge the span of time since each of these gene-duplication events – the longest span being 700 million years – and compare it with the changes in the two proteins’ interaction partners. “This provides a measure of how evolution has rewired the functions of these proteins,” says Vidal. “Our large, high-quality dataset and the naturally high frequency of these gene duplications in Arabidopsis allowed us to make such an analysis for the first time.”

The researchers found evidence that the Arabidopsis protein partnerships tend to change quickly after the duplication event, then more slowly as the duplicated gene settles into its new function and is held there by evolutionary pressure. “Even though the divergence of these proteins’ amino-acid sequences may continue, the divergence in terms of their respective partners slows drastically after a rapid initial change, which we hadn’t expected to see,” Vidal says.

In the July 29 issue of Science researchers from the Arabidopsis interactome mapping study reported yet another demonstration of the usefulness of their approach. Led by Jeffery L. Dangl of the University of North Carolina at Chapel Hill, they examined Arabidopsis protein interactions with the bacterium Pseudomonas syringae (Psy) and a fungus-like microbe called Hyaloperonospora arabidopsidis (Hpa). “Even though these two pathogens are separated by about a billion years of evolution, it turns out that the ‘effector’ proteins they use to subvert Arabidopsis cells during infection are both targeted against the same set of highly connected Arabidopsis proteins,” says Ecker. “We looked at some of these targeted Arabidopsis proteins and found evidence that they serve as ‘hubs’ or control points for the plant immune system and related systems.”

Ecker and his colleagues hope that these studies mark the start of a period of rapid advancement in understanding plant biology, and in putting that knowledge to use for human benefit. “This starts to give us a big, systems-level picture of how Arabidopsis works, and much of that systems-level picture is going to be relevant to – and guide further research on – other plant species, including those used in human agriculture and even pharmaceuticals,” Ecker says.

The “Arabidopsis Interactome Mapping Consortium” consists of over 20 national and international laboratories that contribute to this study with support from a number of funding agencies including the National Science Foundation and the National Institutes of Health.

About the National Science Foundation (NSF):
The National Science Foundation is an independent federal agency created by Congress in 1950 “to promote the progress of science; to advance the national health, prosperity, and welfare; to secure the national defense…” NSF’s goals—discovery, learning, research infrastructure and stewardship—provide an integrated strategy to advance the frontiers of knowledge, cultivate a world-class science and engineering workforce, expand the scientific literacy of all citizens, and build the nation’s research capability through investments in advanced instrumentation and facilities, and support excellence in science and engineering research and education through a capable and responsive organization. For more information about NSF, visit www.nsf.gov.

About the National Institutes of Health (NIH):
The Nation’s Medical Research Agency – includes 27 Institutes and Centers and is a component of the U.S. Department of Health and Human Services. It is the primary federal agency for conducting and supporting basic, clinical and translational medical research, and it investigates the causes, treatments, and cures for both common and rare diseases. For more information about NIH and its programs, visit www.nih.gov.