The new approach shows how cells in the spinal cord synchronize many neurons at once to allow complex movements, which could have implications for treating spinal cord injuries and diseases

The new approach shows how cells in the spinal cord synchronize many neurons at once to allow complex movements, which could have implications for treating spinal cord injuries and diseases

LA JOLLA–When you’re taking a walk around the block, your body is mostly on autopilot–you don’t have to consciously think about alternating which leg you step with or which muscles it takes to lift a foot and put it back down. That’s thanks to a set of cells in your spinal cord that help translate messages between your brain and your motor neurons, which control muscles.

Now, for the first time, researchers have created a method to watch–in real time–the activity of those motor neurons. The new technology, developed by Salk scientists and published in Neuron on September 2, 2015, is helping researchers understand how spinal cord cells make connections with motor neurons, and how clinicians might be able to repair those connections in patients with spinal cord injuries or neurodegenerative diseases like amyotrophic lateral sclerosis (ALS).

Salk scientists were able to selectively add fluorescent proteins to the nuclei of motor neurons (red) using cutting-edge genetic techniques to show how cells in the spinal cord synchronize many neurons at once to allow complex movements.

“Using optical methods to be able to watch neuron activity has been a dream over the past decade,” says Samuel Pfaff, a professor in Salk’s Gene Expression Laboratory. “Now, it’s one of those rare times when the technology is actually coming together to show you things you hadn’t been able to see before.”

In the past, to measure the activity of neurons–whether in the brain or extending throughout the body–scientists relied on electrodes that could detect the change in electrical voltage inside a cell when it’s activated. But it is tricky to use electrodes to simultaneously record the activity of many different neuron types at once to study how their activity is synchronized.

To get around this shortcoming of electrode readings, Pfaff’s team used a fluorescent sensor protein called GCaMP6f that lights up whenever a neuron is activated. Unlike the electrodes, the protein could easily be added to many different cells at once. When Pfaff and his colleagues added GCaMP6f to motor neurons, they could watch with a microscope which cells were activated in a mouse spinal cord when chemicals that turn on walking circuits were added. 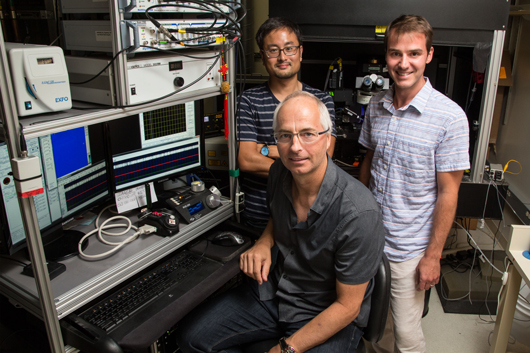 “You don’t need to do any kind of post-image processing to interpret this,” says Pfaff. “These are just raw signals you can see through the eyepiece of a microscope. It’s really a jaw-dropping kind of visualization for a neuroscientist.”

Pfaff’s group used the new method to answer a long-standing question about how a collection of cells in the spinal cord, called the locomotor central pattern generator (CPG), connects to the right motor neurons to allow movements like walking. The CPG, Pfaff says, is where relatively simple signals from the brain–to walk forward, or move your hand off a hot stove–are translated into more complex instructions for motor neurons to control muscles.

“Our nervous system has to make decisions and computations to tell different muscles to contract, or when not to contract, or the amount of force and speed to use when contracting,” Pfaff explains. It’s the CPG that helps make many of these computations, scientists believe. So normal movement requires that CPG neurons in the spinal cord connect to and control when motor neurons fire. But, until now, researchers didn’t know exactly how the CPG cells forged these connections.

By tweaking the locations and identities of motor neurons, and then watching the resulting patterns of activation using their new fluorescent technique, Chris Hinckley in the Pfaff laboratory found that the CPG didn’t rely solely on the cells’ locations to connect to them. Instead, the genetic identity of each subtype of cells–what makes those that control the quadriceps muscle different from those that control the calf muscle for instance–is also important.

That’s a key finding, Pfaff says, for research on how to treat spinal cord injuries and ALS. Currently, many scientists are attempting to turn stem cells into motor neurons, which they then implant into the spinal cord to regenerate damaged connections. Pfaff’s new results, though, suggest that general motor neurons might not do the trick–the best treatment may require the right subtypes of motor neurons. More work, however, is needed to understand the implications of this and exactly how it might translate to disease treatment.

Other researchers on the study were Joseph D. Dekker and Haley O. Tucker of The University of Texas at Austin; and Christopher A. Hinckley, William A. Alaynick, Benjamin W. Gallarda, Marito Hayashi, Kathryn L. Hilde, Shawn P. Driscoll and Tatyana O. Sharpee of the Salk Institute.

The work and the researchers involved were supported by grants from the National Institutes of Health, Howard Hughes Medical Institute, the Christopher and Dana Reeve Foundation, the Sol Goldman Trust and the Marshall Heritage Foundation. Pfaff is an HHMI investigator and the Benjamin H. Lewis chair in Neuroscience at the Salk Institute for Biological Studies.