Scientists identify new cause of brain bleeding immediately after stroke

Scientists identify new cause of brain bleeding immediately after stroke

LA JOLLA—By discovering a new mechanism that allows blood to enter the brain immediately after stroke, researchers from the Salk Institute and University of California (UC) Irvine reveal a possible means to create new therapies that may reduce or prevent stroke-induced damage in the brain.

Stroke is a complex and devastating neurological condition that is the fourth-leading cause of death and primary reason for disability in the United States. It results in severe blood-brain barrier damage, which allows entry of blood-borne material into the brain contributing to cellular death and the permanent cognitive and movement impairments seen in stroke patients.

In their research, Axel Nimmerjahn, an assistant professor at the Salk Institute for Biological Studies, and Dritan Agalliu, assistant professor of developmental and cell biology at UC Irvine, have developed a novel transgenic mouse strain, in which they use a fluorescent tag to see the barrier-forming tight junctions between the cells that make up the blood vessels in the nervous system. This allows them to image dynamic changes in the barrier during and after stroke in living animals. 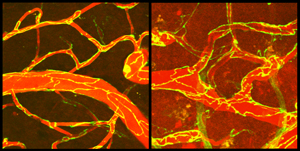 The microscope image on the left shows brain blood vessels (red) with intact junctions (yellow lines) between cells that compose the vessel walls. The image on the right shows blood vessels and junctions two days after a stroke. Blood material has entered the brain (dark red background). Scientists from the Salk Institute and UC Irvine showed that early blood material leakage (within 6 hours after stroke) is due to increased carrier protein transport through the cells of the vessel walls and not through gaps at the junctions, as previously thought.

While seeing that the barrier function is rapidly impaired after stroke (within 6 hours), they unexpectedly found that this early barrier failure is not due to breakdown of tight junctions between the blood vessel cells, as had previously been suspected, because tight junction breakdown did not occur until two days after the injury.

Instead, the researchers report dramatic increases in carrier proteins, called serum albumin, flowing directly into brain tissue. These proteins travel through the cells that make up the blood vessels, called endothelial cells, using a specialized transport system that normally operates only in non-brain vessels or immature vessels within the central nervous system (CNS). The authors’ work suggests that this transport system underlies the initial failure of the barrier, allowing entry of blood material into the brain immediately after a stroke (within 6 hours).

“These findings suggest new therapeutic directions aimed at regulating flow through endothelial cells in the barrier after a stroke occurs, and they have the potential to reduce or prevent stroke-induced damage in the brain,” Agalliu says.

The Agalliu laboratory is currently blocking degradation of tight junction between endothelial cells using genetic methods in mice and examining the consequences for preventing stroke progression. Early regulation of the specialized transport system in the CNS following stroke, which the Agalliu and Nimmerjahn laboratories have uncovered, may spur development of imaging methods or biomarkers in human studies to identify the initial stages of stroke and thereby prevent damage as early as possible.

The study was supported by the National Institutes of Health (grants 1R01 HL116995-01 and 1DP2NS083038), the American Heart Association (grant 12BGIA11560014), the National Multiple Sclerosis Society (grant RG4673A1/1), the Whitehall Foundation and the Rita Allen Foundation.

About the Salk Institute for Biological Studies:
The Salk Institute for Biological Studies is one of the world’s preeminent basic research institutions, where internationally renowned faculty probe fundamental life science questions in a unique, collaborative and creative environment. Focused both on discovery and on mentoring future generations of researchers, Salk scientists make groundbreaking contributions to our understanding of cancer, aging, Alzheimer’s, diabetes and infectious diseases by studying neuroscience, genetics, cell and plant biology, and related disciplines. Faculty achievements have been recognized with numerous honors, including Nobel Prizes and memberships in the National Academy of Sciences. Founded in 1960 by polio vaccine pioneer Jonas Salk, M.D., the Institute is an independent nonprofit organization and architectural landmark.

About the University of California, Irvine:
Founded in 1965, UC Irvine is a top-ranked university dedicated to research, scholarship and community service. Led by Chancellor Michael Drake since 2005, UC Irvine is among the most dynamic campuses in the University of California system, with more than 28,000 undergraduate and graduate students, 1,100 faculty and 9,400 staff. Orange County’s second-largest employer, UC Irvine contributes an annual economic impact of $4.3 billion. For more UC Irvine news, visit news.uci.edu.