LA JOLLA, CA—Scientists at the Salk Institute for Biological Studies have identified a gene that tells cells to develop multiple cilia, tiny hair-like structures that move fluids through the lungs and brain. The finding may help scientists generate new therapies that use stem cells to replace damaged tissues in the lung and other organs.

“Cells with multiple cilia play a number of important roles, including moving fluids through the respiratory tract, brain and spinal cord,” says Christopher R. Kintner, a professor in Salk’s Molecular Neurobiology Laboratory, who led the research. “Knowing the gene that instructs cells to develop multiple cilia helps us understand how we might coax stem cells into developing into this type of cell, which we could then use to repair damaged tissue.” 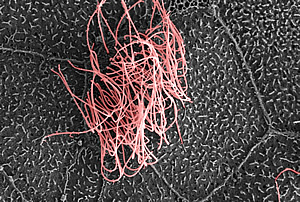 The Salk researchers discovered the master gene that tells cells to develop multiple hair-like cilia, such as those seen in pink in this false-colored electron microscope image of the surface of a frog embryo.

The findings of the research, which was supported by the National Institutes of Health and Salk’s Innovation Grants Program, were published in the January 8 online issue of Nature Cell Biology.

Kintner and his collaborator, Jennifer Stubbs, a scientist now at Pathway Genomics, a San Diego biotech company, along with Eszter Vladar, a postdoctoral fellow in the laboratory of Jeffery Axelrod, at the Stanford University School of Medicine, made their discovery by initially studying the embryos of African clawed frogs (Xenopus laevis).

Multiciliate cells form on the outside of the embryos, making them easy to study, and the genetic mechanisms that direct the frog cells to develop multiple cilia are likely similar to those of humans.

Humans and other organisms inherited cilia from our single-celled primordial ancestors that used these beating structures as a form of propulsion. Most cells in our body project a single, non-moving cilium used as a tiny antenna for detecting chemical and physical stimuli. But certain specialized tissues require cells with 100 to 200 moving cilia that beat in concert to move fluids through the body.

These cells aid in pushing cerebrospinal fluid through the brain and spinal cord, helping to circulate and replenish this fluid. In the respiratory system, the cilia push mucus that traps dust, pathogens and other foreign matter from the lung up into the trachea, helping prevent infections.

In a previous study, published in Nature Genetics, Kintner and Stubbs identified a protein, FoxJ1, that promoted the formation of a single moving cilium. What remained unclear is how certain cells activate FoxJ1 in a way that leads to the formation of hundreds of motile cilia per cell.

In their new study, Kintner and his collaborators identified a gene that produces a second protein, which they dubbed “multicilin,” that tells cells to develop multiple cilia. When cells are exposed to multicilin, their genetic mechanisms for developing multiple cilia are activated. In a developing embryo, the protein instructs certain stem cells that will line the lungs, kidney and skin to develop into multiciliate cells.

When the researchers inhibited multicilin’s action, the frogs’ skin and kidney failed to form multiciliate cells. The scientists also found that multicilin is both necessary and sufficient to instruct the development of multiple cilia in cells that line the airways of mice.

“This means that multicilin directs the development of these cells in a number of different organs,” Kintner says. “How multiciliate cells develop had been a mystery, but this fills in a big piece of the puzzle.”

Kintner notes that patients with respiratory diseases such as chronic asthma, emphysema and cystic fibrosis often suffer from lung infections, which may result from damage to the ciliated cells that move protective mucus out of the airways. In the future, stem cell therapies might replace those damage cells with new ciliated cells, but first scientists need to know how to guide stem cells along a pathway into multiciliate cells.

“Our findings suggest that multicilin could be central to differentiating stem cells into replacement cells,” Kintner says. “It’s a necessary step in developing such therapies.”

For information on the commercialization of this technology, please contact: