LA JOLLA, CA—Many people suffer from a devastating condition known as critical limb ischemia (CLI) that can lead to muscle wasting and even amputation. The disease is linked to the blockage of blood flow to the skeletal muscle and current treatment options include rehabilitative exercise and surgical bypass of blood vessels. New preclinical research suggests there may be a way to restore blood supply in skeletal muscle without traditional intervention.

Scientists at The University of Texas Health Science Center at Houston (UTHealth) and the Salk Institute for Biological Studies announced in the March 2 print issue of the journal Cell Metabolism that they have identified a genetic switch that can increase the number of blood vessels in the skeletal muscle of non-exercising mice. 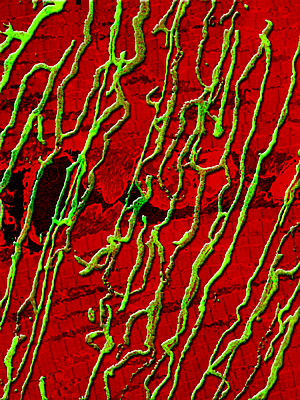 “This consequently resulted in a striking increase in muscle blood supply as measured by imaging and angiography,” said Vihang Narkar, Ph.D., lead investigator and assistant professor of molecular medicine at the UTHealth Medical School. “These genetically-transformed muscles also acquire other characteristics of slow muscles, such as improved metabolic capacity and fatigue resistance that can be additionally beneficial in resolving muscle vascular disease.”

Narkar, whose UTHealth laboratory is in the Center for Diabetes and Obesity Research at the Brown Foundation Institute of Molecular Medicine for the Prevention of Human Diseases, said, “The identification of the estrogen-related receptor gamma vascular switch will open potential therapeutic avenues for treating CLI and other cardiovascular diseases linked to defective blood supply.”

Colin Barker, M.D., assistant professor of cardiology at the UTHealth Medical School, said new research is needed to help people with peripheral artery disease, particularly those with the most severe form – critical limb ischemia. “Poor circulation in the legs can lead to muscle wasting, infections, severe pain, and amputation,” he said. “Dr. Narkar’s work potentially has many useful applications. It is very much in the translational medicine arena.”

“Understanding the gene network that specifies high vascular supply to muscle gives us a new and very powerful tool to promote improved muscle performance and the promise of fitness, especially for those who cannot work out,” says Ronald M. Evans, Ph.D., senior author, Howard Hughes Medical Institute Investigator and professor in the Salk Institute’s Gene Expression Laboratory. “This is good news for people with heart disease, frailty, peripheral vascular disease, and more generally those who have a variety of medical problems where exercise could be helpful but is not possible to achieve.”

In 2010, an estimated 2.8 to 3.5 million U.S. citizens suffered from critical limb ischemia, according to a report by THE SAGE GROUP, an independent research and consulting company specializing in peripheral artery disease. CLI risk factors include diabetes, obesity and smoking.

“Exercise is an important part of any intervention strategy to prevent or treat diabetes mellitus and obesity,” said Perry Bickel, M.D., associate professor of medicine at the UTHealth Medical School and director of the UTHealth Center for Diabetes and Obesity Research. “Results by Drs. Narkar and Evans support the notion that in the future we may be able to design drugs that produce the benefits of exercise in order to counteract the damage that diabetes and obesity cause to the body, such as blockages of blood vessels.”

Narkar and Evans collaborated on a highly-publicized study published in the journal Cell in 2008 in which they used two investigational exercise mimetic drugs – GW1516 and AICAR – to increase the endurance of non-exercising mice. These drugs target different genetic switches, namely PPAR delta and AMPK.

The study, titled “Exercise and PGC1-alpha-Independent Synchronization of Type I Muscle Metabolism and Vasculature by ERR gamma,” was supported by funding from the Howard Hughes Medical Institute, the Larry L. Hillblom Foundation, the Nuclear Receptor Signaling Atlas, The Leona M. and Harry B. Helmsley Charitable Trust and the National Institutes of Health (NIH) to Evans. Grants from the NIH and the Muscular Dystrophy Association to Narkar also supported this study.

About The University of Texas Health Science Center at Houston (UTHealth):

The University of Texas Health Science Center at Houston (UTHealth), the most comprehensive academic health system in The University of Texas System and the U.S. Gulf Coast region, is home to schools of biomedical informatics, biomedical sciences, dentistry, medicine, nursing and public health. It also includes a psychiatric hospital, multiple institutes and centers, a growing network of clinics and outreach programs in education and care throughout the region. The university’s primary teaching hospitals include Memorial Hermann-Texas Medical Center, Children’s Memorial Hermann Hospital and Lyndon B. Johnson General Hospital. Founded in 1972, its faculty, staff and students are committed to delivering innovative solutions that create the best hope for a healthier future.