The switch controls the growth of telomeres, the timekeepers of cells

The switch controls the growth of telomeres, the timekeepers of cells

LA JOLLA–Scientists at the Salk Institute have discovered an on-and-off “switch” in cells that may hold the key to healthy aging. This switch points to a way to encourage healthy cells to keep dividing and generating, for example, new lung or liver tissue, even in old age.

In our bodies, newly divided cells constantly replenish lungs, skin, liver and other organs. However, most human cells cannot divide indefinitely–with each division, a cellular timekeeper at the ends of chromosomes shortens. When this timekeeper, called a telomere, becomes too short, cells can no longer divide, causing organs and tissues to degenerate, as often happens in old age. But there is a way around this countdown: some cells produce an enzyme called telomerase, which rebuilds telomeres and allows cells to divide indefinitely.

In a new study published September 19th in the journal Genes and Development, scientists at the Salk Institute have discovered that telomerase, even when present, can be turned off. 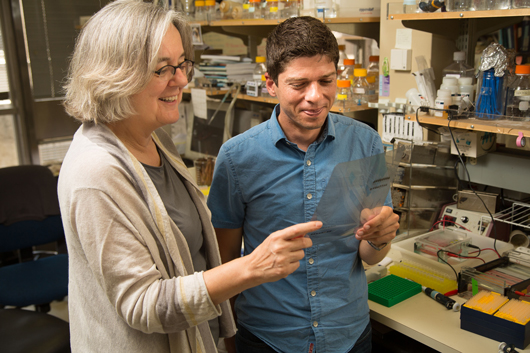 “Previous studies had suggested that once assembled, telomerase is available whenever it is needed,” says senior author Vicki Lundblad, professor and holder of Salk’s Ralph S. and Becky O’Connor Chair. “We were surprised to discover instead that telomerase has what is in essence an ‘off’ switch, whereby it disassembles.”

Understanding how this “off” switch can be manipulated–thereby slowing down the telomere shortening process–could lead to treatments for diseases of aging (for example, regenerating vital organs later in life).

“We wanted to be able to study each component of the telomerase complex but that turned out to not be a simple task,” Tucey said. Tucey developed a strategy that allowed him to observe each component during cell growth and division at very high resolution, leading to an unanticipated set of discoveries into how–and when–this telomere-dedicated machine puts itself together.

Every time a cell divides, its entire genome must be duplicated. While this duplication is going on, Tucey discovered that telomerase sits poised as a “preassembly” complex, missing a critical molecular subunit. But when the genome has been fully duplicated, the missing subunit joins its companions to form a complete, fully active telomerase complex, at which point telomerase can replenish the ends of eroding chromosomes and ensure robust cell division.

Surprisingly, however, Tucey and Lundblad showed that immediately after the full telomerase complex has been assembled, it rapidly disassembles to form an inactive “disassembly” complex — essentially flipping the switch into the “off” position. They speculate that this disassembly pathway may provide a means of keeping telomerase at exceptionally low levels inside the cell. Although eroding telomeres in normal cells can contribute to the aging process, cancer cells, in contrast, rely on elevated telomerase levels to ensure unregulated cell growth. The “off” switch discovered by Tucey and Lundblad may help keep telomerase activity below this threshold.

This research was supported by the National Institutes of Health, the Fritz B. Burns Foundation and a Rose Hills Foundation Fellowship.

Regulated assembly and disassembly of the yeast telomerase quaternary complex