LA JOLLA, CA—Growing evidence suggests that there may be a link between diabetes and Alzheimer’s disease, but the physiological mechanisms by which diabetes impacts brain function and cognition are not fully understood. In a new study published in Aging Cell, researchers at the Salk Institute for Biological Studies show, for the first time, that diabetes enhances the development of aging features that may underlie early pathological events in Alzheimer’s.

Specifically, the Salk team found increases in two hallmarks of Alzheimer’s-accumulations of amyloid beta (Abeta) and tau protein-in the brains of diabetic mice, especially in cells surrounding blood vessels. Abeta, the misfolded peptide that is thought in part to cause Alzheimer’s disease, aggregated inside astrocytes, star-shaped brain cells that, upon interaction with Abeta, release inflammatory molecules that can destroy neurons. Previously, this had not been shown in mouse models of type 1 diabetes (T1D). 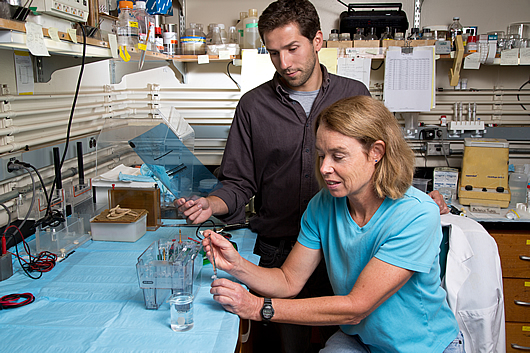 The findings suggest that the neurovascular system may be a good candidate for new therapeutic targets to treat Alzheimer’s in the early stages of the disease. 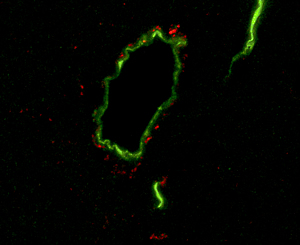 This microscope image shows blood vessels in the brain of mouse (green) surrounded by amyloid beta peptides (red), a component of the amyloid plaques found in the brains of Alzheimer’s patients. Salk researchers found that these peptides accumulate in the brains of diabetic and aged mice, a finding that may help explain the connection between diabetes and Alzheimer’s.

Alzheimer’s and diabetes are two diseases that are increasing at an alarming rate within the U.S. population. Alzheimer’s affects one in 10 Americans over 65 years of age and nearly 50 percent of those over 85. Similarly, more than 8 percent of Americans (approximately 26 million people) have diabetes, with the vast majority of those individuals being over 60.

Maher says her team is uncertain of the precise mechanism behind the increase in Abeta and tau in the mouse brain, but their data suggest that changes in astrocytes, as well as other pro-inflammatory processes and the bonding of proteins with sugar molecules (called non-enzymatic glycation), may contribute.

“Astrocytes play a key role in maintaining nerve cells in the brain,” says lead study author Antonio Currais, a postdoctoral researcher at Salk. “Both chronic peripheral inflammation and increased non-enzymatic glycation are associated with diabetes, and these changes may act on the brain to alter astrocyte function, which eventually leads to Alzheimer’s-like changes.”

All nerve cells are closely connected to blood vessels, as they need nutrients—especially glucose (sugar) and oxygen—provided by the blood in order to function. Astrocytes facilitate the transfer of nutrients between blood vessels and cells. The buildup of Abeta at sites where astrocytes interact with blood vessels suggest that this could impair the transfer of nutrients. The type of Abeta localization seen in Maher’s mouse models is also found in human Alzheimer’s patients

To examine the contributions of diabetes to Alzheimer’s-related pathology in the aged brain, the Salk researchers induced T1D in two sets of mouse models. One set, known as SAMP8 mice, undergo accelerated aging and develop early deterioration in learning and memory, as well as a number of brain alterations similar to those found in Alzheimer’s. The other set, SAMR1 mice, which in this study came from the same gene pool as the SAMP8 mice, age normally.

Using these mice, Maher and her colleagues addressed how T1D interacts with age to contribute to Alzheimer’s-related pathology. They showed that T1D elicits a wide range of pathological changes in the brains of both strains of mice, which are exacerbated by premature aging.

The Salk study is the first to show that these modifications are similar to those seen in old nondiabetic SAMP8 mice and to identify unique pathological changes, such as increases in markers for inflammation, in aged, T1D SAMP8 mice.
Unlike most mouse studies of Alzheimer’s, Maher’s mice were not engineered to produce high levels of human Abeta or tau,so all of their observations came from naturally occurringAbeta and tau.

The work was supported by the National Institutes of Health, the Fritz B. Burns Foundation, the Bundy Foundation, Fundação para a Ciência e a Tecnologia and the Alzheimer’s Association.