LA JOLLA—Frogs, dogs, whales, snails can all do it, but humans and primates can’t. Regrow nerves after an injury, that is—while many animals have this ability, humans don’t. But new research from the Salk Institute suggests that a small molecule may be able to convince damaged nerves to grow and effectively rewire circuits. Such a feat could eventually lead to therapies for the thousands of Americans with severe spinal cord injuries and paralysis.

“This research implies that we might be able to mimic neuronal repair processes that occur naturally in lower animals, which would be very exciting,” says the study’s senior author and Salk professor Kuo-Fen Lee. The results were published today in PLOS Biology.

For a damaged nerve to regain function, its long, signal-transmitting extensions known as axons need to grow and establish new connections to other cells. 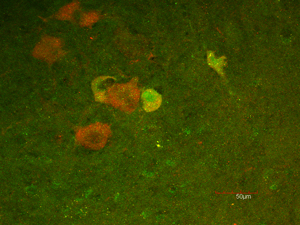 The presence of p45 (green staining) and p75 (red staining) indicates that motor neurons increase both p45 and p75 expression after sciatic nerve injury in an animal.

In a study published last summer in PLOS ONE, Lee and his colleagues found that the protein p45 promotes nerve regeneration by preventing the axon sheath (known as myelin) from inhibiting regrowth. However, humans, primates and some other more advanced vertebrates don’t have p45. Instead, the researchers discovered a different protein, p75, that binds to the axon’s myelin when nerve damage occurs in these animals. Instead of promoting nerve regeneration, p75 actually halts growth in damaged nerves.

“We don’t know why this nerve regeneration doesn’t occur in humans. We can speculate that the brain has so many neural connections that this regeneration is not absolutely necessary,” Lee says.

In the study published today, the scientists looked at how two p75 proteins bind together and form a pair that latches onto the inhibitors released from damaged myelin.

By studying the configurations of the proteins in solutions using nuclear magnetic resonance (NMR) technology, the researchers found that the growth-promoting p45 could disrupt the p75 pairing. 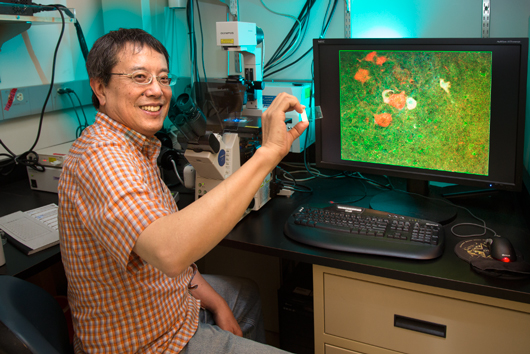 “For reasons that are not understood, when p45 comes in, it breaks the pair apart,” says Lee, holder of the Helen McLoraine Chair in Molecular Neurobiology.

What’s more, the p45 protein was able to bind to the specific region in the p75 protein that is critical for the formation of the p75 pair, thus decreasing the amount of p75 pairs that bond to inhibitors release from myelin. With less p75 pairs available to bond to inhibitor signals, axons were able to regrow.

The findings suggest that an agent—either p45 or another disrupting molecule—that can effectively break the p75 pair could offer a possible therapy for spinal cord damage.

One method of therapy could be to introduce more p45 protein to injured neurons, but a smarter tactic might be to introduce a small molecule that jams the link between the two p75 proteins, Lee says. “Such an agent could possibly get through the blood-brain barrier and to the site of spinal cord injuries,” he says.

The next step will be to see if introducing p45 helps regenerate damaged human nerves. “That is what we hope to do in the future,” Lee says.

Collaborating with Lee on this work were Tsung-Chang Sung, Zhijiang Chen and Jiqing Xu, from the Salk Institute; Marçal Vilar, Irmina Garcia-Carpio and Eva M. Fernandez, from the Neurodegeneration Unit, UFIEC-ISCIII, in Madrid, Spain; and Rolan Reik from the Laboratory for Physical Chemistry, ETH Zürich, in Zürich, Switzerland.

This research was supported by grants from the National Institutes of Health, Muscular Dystrophy Association and Clayton Foundation.