La Jolla, CA – Just how a dividing cell rebuilds the nuclear envelope, the protective, functional wrapping that encases both the original and newly copied genetic material, has been a source of controversy for the last 20 years. The answer matters because the architecture established during formation of the envelope is regarded as key to future regulation of gene expression.

Now scientists at the Salk Institute of Biological Studies, reporting in the September 9 advanced online edition of Nature Cell Biology, lay the debate to rest. Studying frog eggs, they discovered that the endoplasmic reticulum (ER), a key cellular organelle shaped like a network of tubes, flattens part of itself during mitosis to form a double-sided sheet, which then bends around what will become the nucleus, the control hub of the cell. 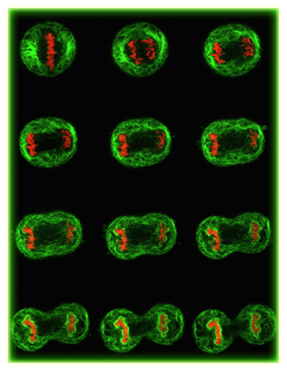 During mitosis, the nuclear envelope disintegrates and the chromosomes (shown in red) line up in the metaphase plate. The chromosomes are pulled apart and the cell starts to divide. During the early stages, individual tubules of the endoplasmatic reticulum (ER; shown in green) bind directly to chromatin. Then, as mitosis proceeds, extra DNA binding proteins that reside in the ER progressively immobilize some of the tubules, flattening them out to create the nuclear membrane.

“The process is simple and elegant,” says Martin W. Hetzer, Ph.D., an assistant professor in the Molecular and Cell Biology Laboratory, who explains, “the membrane tubules are flattened as they associate with chromatin. Our model does not involve vesicle fusion.”

The most dramatic event during nuclear assembly following replication and separation of chromosomes is the reformation of the nuclear envelope, a highly structured barrier that separates the nuclear interior from the rest of the cell, say Hetzer and Daniel J. Anderson, a graduate student in Hetzer’s lab and co-author of the study. The envelope is the gateway into the nucleus and, thus, restricts access to the genome; it is composed of a concentric double membrane that is penetrated by nuclear pores, which serve as transport channels between the nucleus and the cytoplasm.

Just as chromosomes duplicate, the cell’s organelles, including the ER, also reproduce themselves. “The ER is always there and remains an intact network of tubes,” says Hetzer. In a mature cell the ER works closely with the genome, synthesizing and transporting the proteins produced under the direction of genes housed inside the nucleus.

Some scientists have believed that the ER in the sister cells help form the nuclear envelope, although proof of the process has been lacking. Others have argued that the new membrane is resurrected from bits of the “old” nuclear membrane that disintegrates when nuclear chromosomes duplicate and pull apart during mitosis. “The problem with this theory, however, is that these fragments would then have to be fused together in the newly produced cells, and that would require massive membrane fusion and a dedicated protein machinery,” Hetzer says. “But no one has ever found it. Our data suggests that the search for this fusion machinery is now obsolete,” he says.

Hetzer and Anderson used a popular scientific model of mitosis, the eggs of Xenopus, an African frog, to determine how the nuclear envelope is restored. They found that the tubules of the ER are connected to each other in a three-way junction that allows them to constantly move and change position relative to each other. During the early phases of mitosis, the end of the tubes bind directly to DNA found at the surface of the chromatin, the tightly bundled coil of genetic material and proteins that form chromosomes after DNA replication. Then, as mitosis proceeds, extra DNA binding proteins that reside in the ER are employed to progressively immobilize some of the tubules, flattening them out to create the nuclear membrane (to see video go to www.salk.edu/videos/Sec61-U2OS-1/Sec61-U2OS-1.html).

“The tubules are squeezed into flat sheets that merge with each other, forming large membrane sheets that cover the entire surface of the chromatin,” Hetzer says. Why this matters, according to Hetzer, is because it is becoming increasingly clear that the nuclear envelope plays an important role in cell function.

“Anchorage of chromatin at the nuclear periphery and its three-dimensional organization within the nuclear interior helps regulate gene expression, and we know that mutations in nuclear envelope proteins cause a variety of different human diseases,” he says. “So knowing how the nuclear membrane is assembled will help us understand nuclear architecture and, in the long run, gene expression.”

The study was funded by NIH and a Pew Scholar Award.