This new atlas of human organ epigenomes provides a starting place to understand the role of chemical markers in development, health and disease

This new atlas of human organ epigenomes provides a starting place to understand the role of chemical markers in development, health and disease

LA JOLLA–For more than a decade, scientists have had a working map of the human genome, a complete picture of the DNA sequence that encodes human life. But new pages are still being added to that atlas: maps of chemical markers called methyl groups that stud strands of DNA and influence which genes are repressed and when.

Now, Salk scientists have constructed the most comprehensive maps yet of these chemical patterns–collectively called the epigenome–in more than a dozen different human organs from individual donors (including a woman, man and child). While the methylation does not change an individual’s inherited genetic sequence, research has increasingly shown it has a profound effect on development and health.

“What we found is that not all organs we surveyed are equal in terms of their methylation patterns,” says senior author Joseph R. Ecker, professor and director of Salk’s Genomic Analysis Laboratory and codirector of The Center of Excellence for Stem Cell Genomics. “The signatures of methylation are distinct enough between organs that we can look at the methylation patterns of a tissue and know whether the tissue is muscle or thymus or pancreas.” The new data was published June 1, 2015 in Nature.

While the genome of an individual is the same in every cell, epigenomes vary since they are closely related to the genes a cell is actually using at any given time. Methylation marks help blood cells ignore the genes required to be a brain or liver cell, for instance. And they can vary over time–a change in a person’s age, diet or environment, for instance, has been shown to affect methylation.

“We wanted to make a baseline assessment of what the epigenome, in particular DNA methylation, looks like in normal human organs,” says Ecker. To do that, the scientists collected cells from 18 organs in 4 individuals and mapped out their methylation profiles. 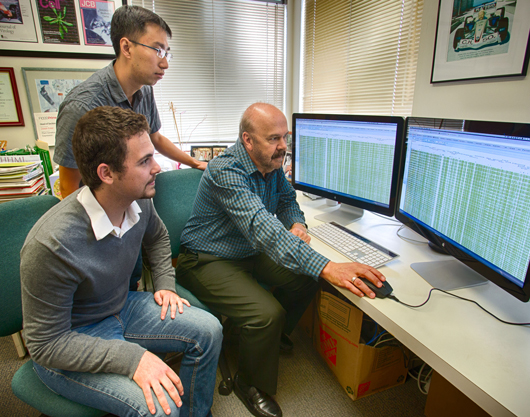 From left: Matthew Schultz, Yupeng He and Joseph Ecker

As expected, the patterns aligned somewhat with genes known to be important for a cell’s function–there was less methylation close to muscle genes in cells collected from muscle, for instance. But other aspects of the new maps were surprising. The researchers detected an unusual form of methylation, called non-CG methylation, which was thought to be widespread only in the brain and stem cells.

“The only place this had been observed before was in the brain, skeletal muscle, germ cells and stem cells,” says Matthew Schultz, formerly a graduate student in the Ecker lab and a first author of the new work. “So, to see it in a variety of normal adult tissues was really exciting.” Researchers don’t yet know the function of that non-CG methylation in adults, but hypothesize that it may suggest the presence of stem cell populations in the adult tissues.

A team at the Salk Institute mapped comprehensive epigenomes of several organs and tissue types from four different donors, which could help better understand health and disease.

The team found other surprises in their research, which point to new avenues to explore. For example, they found that many regions showing dynamic methylation aren’t located where expected–in a section of DNA called the promoter, as well as the regulatory regions that are upstream of the promoter. “In the past, people have really thought the promoter or the upstream regions are where everything is happening,” says Ecker, who is also a Howard Hughes Medical Institute and Gordon and Betty Moore Foundation investigator. “But we found that methylation changes that are most correlated with gene transcription are often in the downstream regions of the promoter.” The observation could affect how and where researchers search for methylation when they’re studying how an individual gene is regulated.

Another surprise was how extensively organs differed from each other in the degree of genome-wide methylation. The pancreas had an unusually low level of methylation, while the thymus had high levels of methylation. Researchers don’t yet know why.

The new results just scratch the surface of completely understanding DNA methylation patterns–there are dozens more organs to profile, numerous unknowns about what shapes and changes the epigenome, and questions about whether different cells–even within a single organ–vary in their methylation patterns.

“What would be interesting to do next is split out different cell types,” says Yupeng He, a graduate student in the Ecker lab and co-first author of the new paper. “The samples we have are heterogeneous mixtures of many cells.”

The researchers hope the results offer a jumping off point, however, to start understanding how diseases, such as those affecting the organs they profiled, may be reflected in changes to the epigenome.

“You could imagine that eventually, if someone is having a problem, a biopsy might not only look at characterizing the cells or genes, but the epigenome as well,” says Ecker.