LA JOLLA—Scientists at the Salk Institute have discovered the developmental source for a key type of neuron that allows animals to walk, a finding that could help pave the way for new therapies for spinal cord injuries or other motor impairments related to disease. 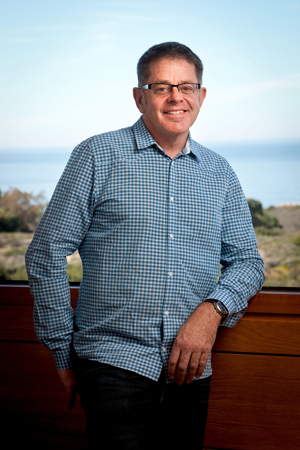 The spinal cord contains a network of neurons that are able to operate largely in an autonomous manner, thus allowing animals to carry out simple rhythmic walking movements with minimal attention—giving us the ability, for example, to walk while talking on the phone. These circuits control properties such as stepping with each foot or pacing the tempo of walking or running.

The researchers, led by Salk professor Martyn Goulding, identified for the first time which neurons in the spinal cord were responsible for controlling a key output of this locomotion circuit, namely the ability to synchronously activate and deactivate opposing muscles to create a smooth bending motion (dubbed flexor-extensor alternation). The findings were published April 2 in Neuron.

Motor circuits in the spinal cord are assembled from six major types of interneurons—cells that interface between nerves descending from the brain and nerves that activate or inhibit muscles. Goulding and his team had previously implicated one class of interneuron, the V1 interneurons, as being a likely key component of the flexor-extensor circuitry. However when V1 interneurons were removed, the team saw that flexor-extensor activity was still intact, leading them to suspect another type of cell was also involved in coordinating this aspect of movement. 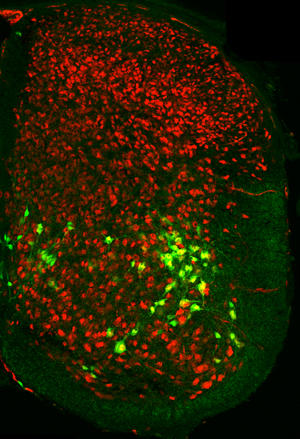 V2b interneurons, responsible for a key locomotion circuit, appear as green with yellow nuclei in a spinal cord while all other neurons are red.

To determine what other interneurons were at play in the flexor-extensor circuit, the team looked for other cells in the spinal cord with properties that were similar to those of the V1 neurons. In doing this they began to focus on another class of neuron, whose function was not known, V2b interneurons. Using a specialized experimental setup that allows one to monitor locomotion in the spinal cord itself, the team saw a synchronous pattern of flexor and extensor activity when V2b interneurons were inactivated along with the V1 interneurons.

The team also showed that this synchronicity led to newborn mice displaying a tetanus-like reaction when the two types of interneurons were inactivated: the limbs froze in one position because they no longer had the push-pull balance of excitation and inhibition that is needed to move.

These findings further confirm the hypothesis put forward over 120 years ago by the Nobel Prize-winning neuroscientist, Charles Sherrington, that flexor-extensor alternation is essential for locomotion in all animals that have limbs. He proposed that specialized cells in the spinal cord called switching cells performed this function. After 120 years, Goulding and researchers have now uncovered the identity of these switching cells. 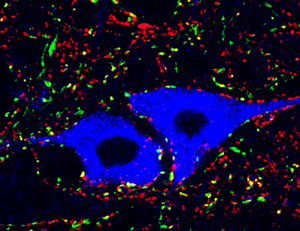 Ankle motor neurons (blue) show the inhibitory synaptic contacts (red) on their cell bodies, some of which are derived from V2b interneurons (yellow).

“Our whole motor system is built around flexor-extension; this is the cornerstone component of movement,” says Goulding, holder of Salk’s Frederick W. and Joanna J. Mitchell Chair. “If you really want to understand how animals move you need to understand the contribution of these switching cells.”

With a more thorough understanding of the basic science around how this flexor-extensor circuit works, scientists will be in a better position to, for example, create a system that can reactivate the spinal cord or mimic signals sent from the brain to the spinal cord.