LA JOLLA, CA—Rapidly dividing cancer cells are skilled at patching up damage that would stop normal cells in their tracks, including wear and tear of telomeres, the protective caps at the end of each chromosome.

Loss of telomeres forces cells out of the dividing game and into a growth arrest state called “senescence,” but cancer cells evade this by employing an enzyme called telomerase to extend eroded telomeres.

If telomerase fails to activate, the tumor cells of about 10 percent of all human cancers have a back-up strategy to build serviceable telomeres and keep dividing. How that pathway, called ALT for alternative lengthening of telomeres, works is unclear, because researchers have had limited options to study it experimentally. 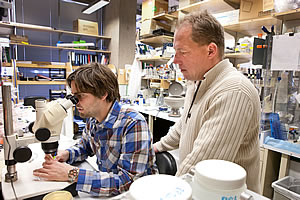 Now scientists at the at Salk Institute for Biological Studies have created roundworms that eke out an existence, and even manage to reproduce, relying solely on ALT to maintain telomeres. That study, published March 16 in EMBO Journal, provides a valuable tool to tinker with the ALT pathway and learn how to block it, with a goal of forcing tumor cells to senesce.

“These worms are the first multicellular organisms we can study in the laboratory that maintain their telomeres through the ALT pathway and not through telomerase,” says Jan Karlseder, a professor in Salk’s Molecular and Cell Biology Laboratory and the study’s senior author. “Up to now we could only study ALT in cell lines derived from tumor cells. Now we can screen for compounds and genes that suppress or regulate ALT in a whole organism, which in worms is fairly easy to do.”

The components of telomere-building pathways are prime targets for cancer researchers. “There is a huge interest in drugs that block telomerase, since 90 percent of cancers use it for telomere maintenance,” says Daniel Lackner, a postdoctoral fellow in the Karlseder lab and one of the study’s first authors. “But these drugs won’t work for the 10 percent of cancers that use the ALT pathway. In fact, some evidence suggests that drugs targeting telomerase might actually increase ALT, making the need for ALT inhibitors more pressing.” 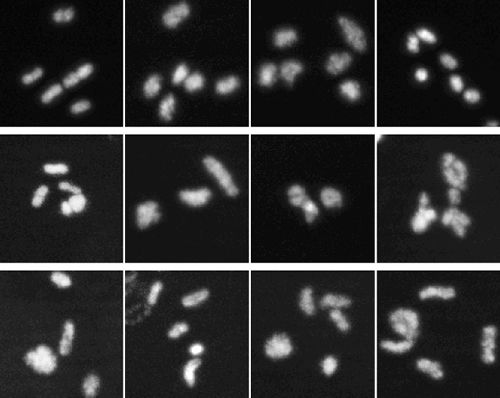 The images in the top row each show six chromosomes found in a normal roundworm.

Despite this irregularity, the Salk researchers’ worms were able to reproduce, providing a new avenue for scientists to study a key pathway in the development of certain cancers.

The new study stems from a 2008 study from the Karlseder lab that was published in Cell. In that paper, they mutated a gene encoding a telomere-binding protein in roundworms. The resulting mutants displayed functional, but slightly scruffier-looking telomeres than those built by telomerase. That was a strong hint that when forced, worm cells, like human cells, can turn on the ALT pathway.

For the new study, the team pushed the mutant worms’ survival capacity to the limit. This time they knocked out a second gene, telomerase itself, and found that these double mutants could reproduce continuously without undergoing senescence. Over the past 3 years a strain of double mutant worms has propagated for over 180 generations.

The group then used biochemistry to confirm that the worms depend totally on ALT for telomere maintenance. The telomeres of double mutants were more sloppily constructed than superior, telomerase-made caps and were similar in length and overall structure to chromosome caps displayed by human cancer cells that employ ALT.

The double mutant worms also contained wisps of telomeric DNA, called c-circles, that are unique by-products of ALT, further evidence that they were persisting via ALT.

Intriguingly, other investigators have reported that c-circles are present in the blood of human bone cancer patients and could potentially serve as a diagnostic for cancers that depend on the ALT rather than the telomerase pathway.

Although the worms are living long, species-wise, they are not quite prospering—which is exactly what one would expect. The study reports that the double mutants have fewer offspring than normal worms, which is how roundworms exhibit “stress.” And many have fused chromosomes, a likely outcome of having barely serviceable telomeres. But what counts is that the animals are viable, rely on ALT only, and their genome reflects aberrations seen in human tumor cells. In short, they are ready for analysis.

Currently, researchers cannot predict what mechanisms a cancer will to use to maintain the telomeres. “Cancers of the bones, stomach and soft tissues may be more efficient in activating ALT than telomerase pathways,” says Karlseder, noting that indicators of ALT have also been observed in other cancer types. “We don’t know why a tumor chooses one pathway over the other. All we know is that ALT may be switched on in response to telomerase inhibition, which means we must understand this pathway.”

Marcela Raices, a former Salk postdoctoral fellow, now at University of California San Francisco, was co-first author with Lackner on the paper. Also contributing were Candy Haggblom of the Karlseder lab and Hugo Maruyama, a former graduate student in the lab, now at Osaka Dental University.

Funding for the study came from the National Institutes of Health, the Glenn Foundation for Medical Research, the Merieux Research Foundation, EMBO and the Blasker-Rose-Miah Fund.