Findings may lead to much-needed therapies for kidney disease

Findings may lead to much-needed therapies for kidney disease

LA JOLLA, CA—Diseases affecting the kidneys represent a major and unsolved health issue worldwide. The kidneys rarely recover function once they are damaged by disease, highlighting the urgent need for better knowledge of kidney development and physiology.

Now, a team of researchers led by scientists at the Salk Institute for Biological Studies has developed a novel platform to study kidney diseases, opening new avenues for the future application of regenerative medicine strategies to help restore kidney function.

For the first time, the Salk researchers have generated three-dimensional kidney structures from human stem cells, opening new avenues for studying the development and diseases of the kidneys and to the discovery of new drugs that target human kidney cells. The findings were reported November 17, 2013 in Nature Cell Biology. 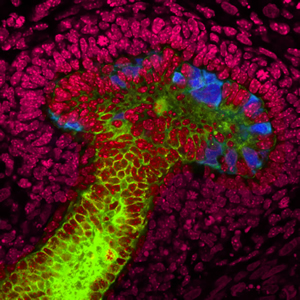 For the first time, Salk scientists have grown human stem cells into early-stage ureteric buds, kidney structures responsible for reabsorbing water after toxins have been filtered out. In the laboratory, they used mouse embryonic kidney cells (seen here in red) to coax the human stem cells to grow into the nascent mushroom-shaped buds (blue and green). Their discovery is a major step in developing regenerative techniques for growing replacement human kidneys.

Scientists had created precursors of kidney cells using stem cells as recently as this past summer, but the Salk team was the first to coax human stem cells into forming three-dimensional cellular structures similar to those found in our kidneys.

“Attempts to differentiate human stem cells into renal cells have had limited success,” says senior study author Juan Carlos Izpisua Belmonte, a professor in Salk’s Gene Expression Laboratory and holder of the Roger Guillemin Chair. “We have developed a simple and efficient method that allows for the differentiation of human stem cells into well-organized 3D structures of the ureteric bud (UB), which later develops into the collecting duct system.”

The Salk findings demonstrate for the first time that pluripotent stem cells (PSCs)-cells capable of differentiating into the many cells and tissue types that make up the body-can made to develop into cells similar to those found in the ureteric bud, an early developmental structure of the kidneys, and then be further differentiated into three-dimensional structures in organ cultures. UB cells form the early stages of the human urinary and reproductive organs during development and later develop into a conduit for urine drainage from the kidneys. The scientists accomplished this with both human embryonic stem cells and induced pluripotent stem cells (iPSCs), human cells from the skin that have been reprogrammed into their pluripotent state.

After generating iPSCs that demonstrated pluripotent properties and were able to differentiate into mesoderm, a germ cell layer from which the kidneys develop, the researchers made use of growth factors known to be essential during the natural development of our kidneys for the culturing of both iPSCs and embryonic stem cells. The combination of signals from these growth factors, molecules that guide the differentiation of stem cells into specific tissues, was sufficient to commit the cells toward progenitors that exhibit clear characteristics of renal cells in only four days.

The researchers then guided these cells to further differentiated into organ structures similar to those found in the ureteric bud by culturing them with kidney cells from mice. This demonstrated that the mouse cells were able to provide the appropriate developmental cues to allow human stem cells to form three-dimensional structures of the kidney. 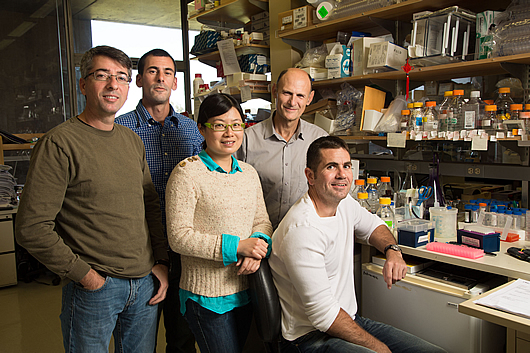 In addition, Izpisua Belmonte’s team tested their protocol on iPSCs from a patient clinically diagnosed with polycystic kidney disease (PKD), a genetic disorder characterized by multiple, fluid-filled cysts that can lead to decreased kidney function and kidney failure. They found that their methodology could produce kidney structures from patient-derived iPSCs.

Because of the many clinical manifestations of the disease, neither gene- nor antibody-based therapies are realistic approaches for treating PKD. The Salk team’s technique might help circumvent this obstacle and provide a reliable platform for pharmaceutical companies and other investigators studying drug-based therapeutics for PKD and other kidney diseases.

“Our differentiation strategies represent the cornerstone of disease modeling and drug discovery studies,” says lead study author Ignacio Sancho-Martinez, a research associate in Izpisua Belmonte’s laboratory. “Our observations will help guide future studies on the precise cellular implications that PKD might play in the context of kidney development. ”

Other researchers on the study were Yun Xia, Emmanuel Nivet, Thomas Gallegos, Keiichiro Suzuki, Daiji Okamura, Min-Zu Wu, Ilir Dubova, and Concepion Rodriguez Esteban, from the Salk Institute; Nuria Montserrat of the Center of Regenerative Medicine in Barcelona, Spain; and Josep Maria Campistol of the Hospital Clinic of Barcelona.