LA JOLLA, CA—Stem cells are key to the promise of regenerative medicine: the repair or replacement of injured tissues with custom grown substitutes. Essential to this process are induced pluripotent stem cells (iPSCs), which can be created from a patient’s own tissues, thus eliminating the risk of immune rejection. However, Shinya Yamanaka’s formula for iPSCs, for which he was awarded last year’s Nobel Prize, uses a strict recipe that allows for limited variations in human cells, restricting their full potential for clinical application.

Now, in this week’s issue of Cell Stem Cell, the Salk Institute’s Juan Carlos Izpisua Belmonte and his colleagues show that the recipe for iPSCs is far more versatile than originally thought. For the first time, they have replaced a gene once thought impossible to substitute, creating the potential for more flexible recipes that should speed the adoption of stem cells therapies. 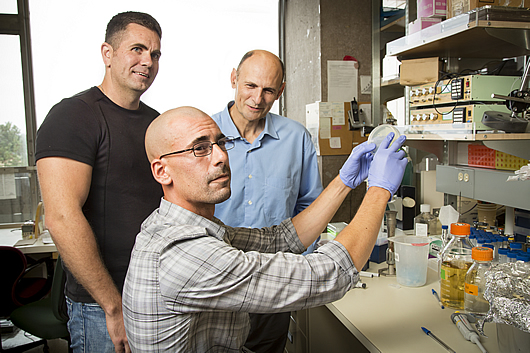 Stem cells come in two types: embryonic stem cells (ESCs), which are immature cells that have never differentiated into specific cell types, and induced pluripotent stem cells, which are mature cells that have been reprogrammed back into an undifferentiated state. After the initial discovery in 2006 by Yamanaka that introducing four different genes into a mature cell could suffice for reprogramming the cell to pluripotency, most researchers adopted his recipe.

Izpisua Belmonte and his colleagues took a fresh approach and discovered that pluripotency (the stem cell’s ability to differentiate into nearly any kind of adult cell) can also be accomplished by balancing the genes required for differentiation. These genes code for “lineage transcription factors,” proteins that start a stem cell down the path to differentiate first into a particular cell lineage, or type, such as a blood cell versus a skin cell, and then finally into a specific cell, such as a white blood cell.

“Prior to this series of experiments, most researchers in the field started from the premise that they were trying to impose an ’embryonic-like’ state on mature cells,” says Izpisua Belmonte, who holds the Institute’s Roger Guillemin Chair. “Accordingly, major efforts had focused on the identification of factors that are typical of naturally occurring embryonic stem cells, which would allow or further enhance reprogramming.” 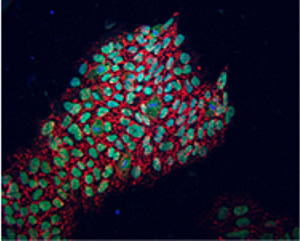 For the first time, the Belmonte laboratory has replaced OCT4, one gene previously thought indispensable for the reprogramming of human cells into embryonic-like cells.

The picture shows newly reprogrammed cells expressing marks of pluripotency as identified by fluorescence (NANOG in green, TRA-1-81 in red).

Despite these efforts, there seemed to be no way to determine through genetic identity alone that cells were pluripotent. Instead, pluripotency was routinely evaluated by functional assays. In other words, if it acts like a stem cell, it must be a stem cell.

That condition led the team to their key insight. “Pluripotency does not seem to represent a discrete cellular entity but rather a functional state elicited by a balance between opposite differentiation forces,” says Izpisua Belmonte.

Once they understood this, they realized the four extra genes weren’t necessary for pluripotency. Instead, it could be achieved by altering the balance of “lineage specifiers,” genes that were already in the cell that specified what type of adult tissue a cell might become.

“One of the implications of our findings is that stem cell identity is actually not fixed but rather an equilibrium that can be achieved by multiple different combinations of factors that are not necessarily typical of ESCs,” says Ignacio Sancho-Martinez, one of the first authors of the paper and a postdoctoral researcher in Izpisua Belmonte’s laboratory.

The group was able to show that more than seven additional genes can facilitate reprogramming to iPSCs. Most importantly, for the first time in human cells, they were able to replace a gene from the original recipe called Oct4, which had been replaced in mouse cells, but was still thought indispensable for the reprogramming of human cells. Their ability to replace it, as well as SOX2, another gene once thought essential that had never been replaced in combination with Oct4, demonstrated that stem cell development must be viewed in an entirely new way.

“It was generally assumed that development led to cell/tissue specification by ‘opening’ certain differentiation doors,” says Emmanuel Nivet, a post-doctoral researcher in Izpisua Belmonte’s laboratory and co-first author of the paper, along with Sancho-Martinez and Nuria Montserrat of the Center for Regenerative Medicine in Barcelona, Spain.

The team believes their work should help to overcome one of the major hurdles to the widespread adoption of stem cell therapies: the original four genes used to reprogram stem cells had been implicated in cancer. “Recent studies in cancer, many of them done by my Salk colleagues, have shown molecular similarities between the proliferation of stem cells and cancer cells, so it is not surprising that oncogenes [genes linked to cancer] would be part of the iPSC recipe,” says Izpisua Belmonte.

With this new method, which allows for a customized recipe, the team hopes to push therapeutic research forward. “Since we have shown that it is possible to replace genes thought essential for reprogramming with several different genes that have not been previously involved in tumorigenesis, it is our hope that this study will enable iPSC research to more quickly translate into the clinic,” says Izpisua Belmonte.

Other researchers on the study were Tomoaki Hishida, Sachin Kumar, Yuriko Hishida, Yun Xia and Concepcion Rodriguez Esteban of the Salk Institute; Laia Miquel and Carme Cortina of the Center of Regenerative Medicine in Barcelona, Spain.

Reprogramming of human fibroblasts to pluripotency with lineage specifiers