LA JOLLA–Researchers at the Salk Institute have healed injured hearts of living mice by reactivating long dormant molecular machinery found in the animals’ cells, a finding that could help pave the way to new therapies for heart disorders in humans.

The new results, published November 6, 2014 in the journal Cell Stem Cell, suggest that although adult mammals don’t normally regenerate damaged tissue, they may retain a latent ability as a holdover, like their distant ancestors on the evolutionary tree. When the Salk researchers blocked four molecules thought to suppress these programs for regenerating organs, they saw a drastic improvement in heart regeneration and healing in the mice. 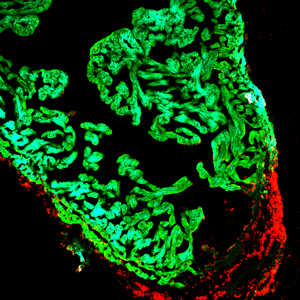 An injured zebrafish heart showing proliferating cells in the wounded area of the heart (red) and cardiac muscle cells (green).

The findings provide proof-of-concept for a new type of clinical treatment in the fight against heart disease, which kills about 600,000 people each year in the United States–more than AIDS and all cancer types combined, according to the U.S. Centers for Disease Control and Prevention.

“Organ regeneration is a fascinating phenomenon that seemingly recapitulates the processes observed during development. However, despite our current understanding of how embryogenesis and development proceeds, the mechanisms preventing regeneration in adult mammals have remained elusive,” says the study’s senior author Juan Carlos Izpisua Belmonte, a professor in the Gene Expression Laboratory at Salk and holder of the Roger Guillemin Chair.

Within the genomes of every cell in our bodies, we have what information we need to generate an organ. Izpisua Belmonte’s group has for many years focused on elucidating the key molecules involved in embryonic development as well as those potentially underlying healing responses in regenerative organisms such as the zebrafish.

Indeed, back in 2003, Izpisua Belmonte’s laboratory first identified the signals preceding zebrafish heart regeneration. And in a 2010 Nature paper, the researchers described how regeneration occurred in the zebrafish. Rather than stem cells invading injured heart tissue, the cardiac cells themselves were reverting to a precursor-like state (a process called ‘dedifferentiation’), which, in turn, allowed them to proliferate in tissue. 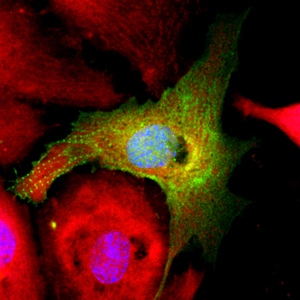 Although in theory it might have seemed like the next logical step to ask whether mammals had evolutionarily conserved any of the right molecular players for this kind of regenerative reprogramming, in practice it was a scientific risk, recalls Ignacio Sancho-Martinez, a postdoctoral researcher in Izpisua Belmonte’s lab.

“When you speak about these things, the first thing that comes to peoples’ minds is that you’re crazy,” he says. “It’s a strange sounding idea, since we associate regeneration with salamanders and fish, but not mammals.”

Most other studies have looked to the hearts of neonatal mammals for molecular clues about proliferation, to no avail. “Instead, we thought, ‘If fish know how to do it, there must be something they can teach us about it,’” says the study’s first author Aitor Aguirre, a postdoctoral researcher in Izpisua Belmonte’s group.

The team decided to focus on microRNAs, in part because these short strings of RNA control the expression of many genes. They performed a comprehensive screen for microRNAs that were changing in their expression levels during the healing of the zebrafish heart and that were also conserved in the mammalian genome.

Their studies uncovered four molecules in particular–MiR-99, MiR-100, Let-7a and Let-7c–that fit their criteria. All were heavily repressed during heart injury in zebrafish and they were also present in rats, mice and humans. 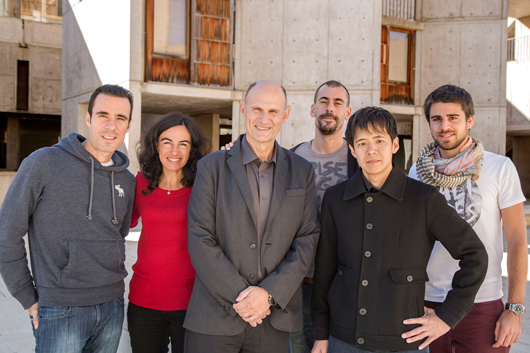 However, in studies of mammalian cells in a culture dish and studies of living mice with heart damage, the group saw that the levels of these molecules were high in adults and did not decline with injury. So the team used adeno-associated viruses specific for the heart to target each of those four microRNAs, suppressing their levels experimentally.

Injecting the inhibitors into the hearts of mice that had suffered a heart attack triggered the regeneration of cardiac cells, improving numerous physical and functional aspects of the heart, such as the thickness of its walls and its ability to pump blood. The scarring caused by the heart attack was much reduced with treatment compared to controls, the researchers found.

The improvements were still obvious three and six months after treatment–a long time in a mouse’s life. “The good thing is that the success was not limited to the short term, which is quite common in cardiac regenerative biology,” Sancho-Martinez says.

The new study focused only on a handful of 70 some microRNA candidates that turned up in the group’s initial screen. These other molecules will likely also play a part in heart cell proliferation, healing scars and promoting the formation of new blood vessels–all processes critical for heart repair, Sancho-Martinez says. The data are available so that other research groups can focus on molecules that interest them.

The next step for Izpisua Belmonte’s team is to move into larger animals and see whether “regenerative reprogramming” can work in larger hearts, and for extended periods after treatment, says Sancho-Martinez. And, although the virus packaging disappeared from the animals’ bodies by 2 weeks after treatment, the scientists are working on a new way to deliver the inhibitors to avoid the need for viruses altogether.

The work was supported by the Ipsen Foundation; the California Institute for Regenerative Medicine; a Nomis Foundation postdoctoral fellowship; the National Heart, Lung, and Blood Institute; the G. Harold and Leila Y. Mathers Charitable Foundation; and The Leona M. and Harry B. Helmsley Charitable Trust.