LA JOLLA, CA—A key question in protein biochemistry is how proteins recognize “correct” interaction partners in a sea of cellular factors. Nowhere is that more critical to know than in the brain, where interactions governing channel protein activity can alter an organism’s behavior. A team of biologists at the Salk Institute for Biological Studies has recently deciphered a molecular code that regulates availability of a brain channel that modulates neuronal excitability, a discovery that might aid efforts to treat drug addiction and mental disorders.

In the this week’s Online Early Edition of the Proceedings of the National Academy of Sciences, Paul Slesinger, Ph.D., Associate Professor in the Clayton Foundation Laboratories for Peptide Biology, and colleagues detail how a regulatory factor called SNX27 distinguishes a brain channel protein called GIRK (short for G-protein-coupled inwardly rectifying potassium channels) from structurally similar proteins and then targets it for destruction. 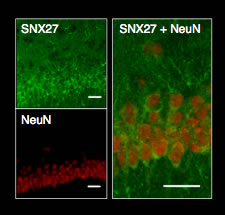 Left images show localization of SNX27 (shown in green) and NeuN (shown in red) in the CA1 region of the hippocampus, the brain’s learning and memory center. Right image shows superimposition of magnified region.

That work extends the group’s 2007 study showing that when SNX27 proteins capture GIRK channels, reducing the number of channels at their rightful destination, the cell membrane. “We were curious about what determined the selectivity of this interaction,” says Slesinger. “We knew that SNX27 interacted with a structural motif found on GIRK channels but many channel proteins display a similar motif. We wanted to know what allowed SNX27 to specifically choose GIRK channels.”

Knowing this is critical because of the connection of GIRK channels to substance abuse. Slesinger and others have shown that alcohol or club drugs linked to sexual assault (GHB) affects GIRK channel function in the brain. Loss-of-inhibition behaviors associated with abuse of these substances result from the fact that GIRK channels allow potassium ions to leak out of a stimulated neuron, thereby dampening a cell’s excitability.

The fact that SNX27 displays a common protein-interaction signature called PDZ domain suggested how SNX27 grabs its partner: GIRKs contain a short, 4-residue sequence that binds to PDZ domains, a recognition motif Slesinger likens to a zip code. But channels similar to GIRKs, called IRKs, displayed an almost identical sequence but were impervious to destruction by SNX27. “We were puzzled by this similarity and swapped the 4-residue code in IRK with the corresponding sequence from GIRK,” says Slesinger. Surprisingly, this IRK/GIRK hybrid did not bind SNX27, indicating that the IRK lacked other elements necessary for SNX27 recognition. 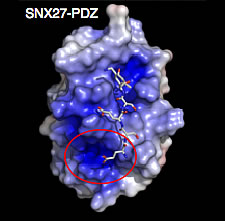 To define these new elements, Slesinger consulted with a long-standing collaborator, Senyon Choe, Ph.D., professor in Salk’s Structural Biology Laboratory. Choe is an expert on a technique known as X-ray crystallography, used to determine the three-dimensional structure of proteins. The team scrutinized crystallized forms of SNX27 wrapped around the GIRK binding motif to try to visualize where the proteins made contact.

“We observed a binding cleft in the SNX27 PDZ domain and a region that formed another pocket with a lot of positive charges,” says Slesinger. “The GIRK fragment lying there had a negative charge upstream of the 4-residue “zip code”. That suggested that this second site allowed a previously unknown electrostatic interaction between these two proteins.” Therefore, SNX27 may recognize a 6-residue motif, like the “zip plus 4” code.

Most significant were experiments conducted by Bartosz Balana, Ph.D., a postdoctoral fellow in the Slesinger lab and the study’s first author. Balana measured currents from cells engineered to carry GIRK channels lacking the charged region and found that GIRK currents were no longer dampened by SNX27, while cells expressing IRK channels displaying the false GIRK “address” now responded to SNX27. “This functional assay pin-pointed residues that dictate SNX27 binding beyond the normal PDZ recognition sequence,” says Bartosz. “This supports a two-site binding model and emphasizes that second site can overrule binding at the classical site.”

An interesting corollary to GIRKs’ involvement in drug-related behavior is that SNX27 levels reportedly increase in rodent models of addiction to stimulants like cocaine and methamphetamine. Selectively blocking this newly identified interaction between GIRK and SNX27 might thwart addiction. “Now we are able to better understand the role of these channels in responses to drugs of abuse. It is our hope that that this work will lead to new strategies to treat diseases such as alcoholism or even, diseases of excitability, such as epilepsy.” says Slesinger.

Also contributing to the study were Kalyn Stern and Laia Bahima of the Slesinger Lab and Innokentiy Maslennikov, and Witek Kwiatkowski of Choe’s Structural Biology Laboratory.

The study was funded by grants from the NIH and the National Alliance for Research on Schizophrenia and Depression.