LA JOLLA—Vicki Lundblad, professor of the Salk Institute’s Molecular and Cell Biology Laboratory, has been awarded the Becky and Ralph S. O’Connor Chair and elected a Fellow of the American Academy of Microbiology.

Lundblad has been named the recipient of the Becky and Ralph S. O’Connor Chair in honor of excellence in the field of molecular and cell biology. Ralph O’Connor, who serves on the Salk Board of Trustees, and his wife, Becky, generously created the chair as an “investment that has the potential for maximum impact on human health.” 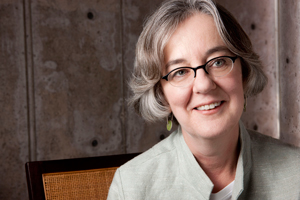 Lundblad has also been elected a 2014 Fellow of the American Academy of Microbiology for her pioneering work in telomere biology. Fellows are elected annually through a highly selective process based on significant contributions to the field of microbiology, a field which boasts the names of Louis Pasteur, Jonas Salk and many others who have made some of the greatest achievements in history.

Lundblad’s research has defined a key molecular mechanism that is critical in both aging and cancer. Lundblad found that the ends of chromosomes, known as telomeres, shorten over time, acting as a “molecular clock” that counts down the number of times a cell can divide. She has also shown that a telomere-dedicated enzyme called telomerase can help reset the clock and increase cell division.

In cancer, rogue cells proliferate, no longer under the control of this countdown clock due to the abundant amounts of telomerase that constantly replenish telomeres. In normal tissues, however, telomeres shorten and eventually block cell division, having a dramatic effect on the aging process. Figuring out how to control this molecular clock suggests the tantalizing possibility of both halting cancerous cells and promoting healthy aging. Toward that end, Lundblad’s lab is currently teasing out the pathways that either promote or inhibit telomerase inside cells.