LA JOLLA, CA—The Salk Institute for Biological Studies announced that Dr. Axel Nimmerjahn, Assistant Professor in the Waitt Advanced Biophotonics Center and holder of the Richard Allan Barry Developmental Chair, has been named a 2011 Rita Allen Scholar. Nimmerjahn is one of seven scientists out of 28 candidates to be selected this year and only the third Salk faculty member to receive this award.

“To be chosen for the Rita Allen Foundation Scholars program is a rigorous, highly selective process and it is a great honor that distinguishes Axel’s outstanding scientific accomplishments,” said Salk President William R. Brody. “I’m delighted that the Foundation has presented him with this recognition and support to facilitate his remarkable research.” 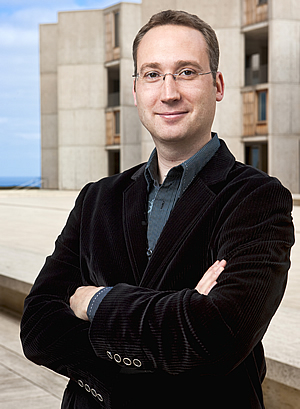 He will receive $500,000 over a five-year period to pursue his research into the role of glial cells in neurovascular coupling, the temporal and spatial coupling between increased neural activity and cerebral blood flow. Glial cells constitute the majority of human brain cells and dynamically interact with neurons and other cells. Once thought to play only a passive, supportive role, glia are now emerging as active players in healthy brain function. Additionally, glia are critically involved in many injuries and diseases including spinal-cord injury, glioma, amyotrophic lateral sclerosis (ALS), and Alexander’s disease.

“Our mission is to invest in transformative ideas and projects that result in significant breakthroughs and solutions to serious health challenges,” said Elizabeth G. Christopherson, President and Chief Executive Officer of the Rita Allen Foundation.

“We have traditionally embraced research with above average risk and groundbreaking possibilities, and are proud of the over 100 Scholars, including a Nobel Laureate and members of the National Academy of Sciences, who have received our financial support.”

Nimmerjahn earned a doctorate in Physics at the Max Planck Institute for Medical Research/University of Heidelberg in Germany. After completing a postdoctoral research fellowship in Biology and Applied Physics at Stanford University in California, he joined the Salk Institute in November 2010.

The Nimmerjahn laboratory concentrates on the innovation of light microscopic tools that will allow the study of glial cells in the intact mammalian brain. To date, the lab has created tools for cell-type-specific staining and genetic manipulation, imaging cellular dynamics in awake-behaving animals, including miniature head-mounted microscopes, and for automated analysis of large-scale imaging data. These and other tools enable them to directly address longstanding questions regarding glial cell function in the intact healthy and diseased brain. Currently, his lab investigates the role of glial cells in information processing, regulation of vascular dynamics and stroke. Resolving these fundamental questions has broad implications for our view of glial cells, the way information is processed in the brain, the interpretation of functional brain imaging signals and the treatment of neurodegenerative brain disease.

Additional information about the Rita Allen Foundation is available at http://www.ritaallenfoundation.org/