Ecker, who was cited by TIME magazine for having one of the most important scientific findings in 2009, brings record number of HHMI Salk appointments to nine.

Ecker, who was cited by TIME magazine for having one of the most important scientific findings in 2009, brings record number of HHMI Salk appointments to nine.

La Jolla—Plant biologist Joseph R. Ecker, Ph.D., professor and director of the Genomic Analysis Laboratory at the Salk Institute for Biological Studies, has been selected for a prestigious position as an investigator of the Howard Hughes Medical Institute (HHMI) and the Gordon and Betty Moore Foundation (GBMF).

“Joe Ecker is highly deserving of this recognition, which is reserved for a select group of extraordinary scientists,” said Salk president William R. Brody. “HHMI and GBMF have made a bold move into plant biology.” Brody continued, “This enhanced focus and appreciation for plant biology has the potential to help us understand and find solutions to critical issues of world hunger, human health, and environmental sustainability. Joe personifies scientific leadership, which is inherent in all HHMI-GBMF appointments. Moreover, Joe’s appointment highlights the strength of our world class plant biology program at the Salk.” 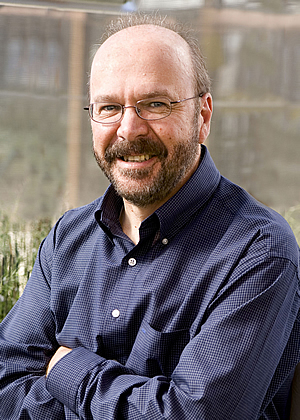 Plant biology has been somewhat of an afterthought in the United States, with only approximately 2 percent of federally funded scientific research dedicated in this area. The commitment of collaboration and recognition from HHMI and GBMF may begin to level the playing field for plant biology.

“Joe is a true leader in the plant field and his work cuts across the entire scientific spectrum. Important discoveries have been made by plant scientists and it will be exciting to see what future findings will arise from the research,” said Jack Dixon, HHMI Vice President and Chief Scientific Officer. “Plant research is of great importance to the physical and economic health of our country with extraordinary potential to influence medicine, food production and energy –we are excited about this new effort at HHMI and our partnership with GBMF.”

Ecker is internationally recognized for his pioneering contributions to plant genomics. Early on, he advocated for the mapping and sequencing of the genome of the tiny mustard weed Arabidopsis thaliana and directed much of the sequencing project. Commonly known as thale cress, Arabidopsis was the first flowering plant to have its entire genome unlocked and is now widely considered one of the most important model organisms for the study of plant genetics and genomes.

“Without Joe’s groundbreaking contributions, Arabidopsis would be just another weed,” says Howard Hughes Medical Institute investigator Joanne Chory, Ph.D., professor and director of the Plant Molecular and Cellular Biology Laboratory and holder of the Howard H. and Maryam R. Newman Chair in Plant Biology. As Chory stated back in 2010, “The study of plant genomes might contribute more to human health and well-being than the study of any animal genome.” “I am delighted for Joe, because he has almost singlehandedly made Arabidopsis the model of choice for plant functional genomics studies owing to his vision, his generosity to the community, and his great enthusiasm for solving problems of scale.”

In the last few years, Ecker’s laboratory started to zero in on genomic methylation patterns, which are essential for normal development and associated with a number of key cellular processes, including carcinogenesis. After perfecting his high-throughput method of mapping the precise position of these individual DNA modifications throughout the genome in Arabidopsis, Ecker is now applying the technological innovations and analytical tools he developed in plants to work on disease-related problems in humans.

“It is a real honor to be selected as an HHMI-GBMF Investigator. With this generous support, my laboratory will be able to pursue new avenues of investigation of epigenetic mechanisms that would otherwise not be possible,” said Ecker.

Ecker has also led groundbreaking studies on the gaseous plant hormone ethylene. Up to one-third of the food produced worldwide is lost or spoiled due to the effects of ethylene, which shortens the shelf life of many fruits and vegetables by putting the ripening process on fast-forward. Ecker’s research has yielded essential insights into the mechanisms of plant growth control and led to the development of new technologies that delay fruit ripening and disease processes.

As an HHMI-GBMF investigator, Ecker will continue to explore the most creative scientific ideas in his field. “In my view, our next challenge is to bring cell biology to the genome, or more precisely, to enable genomics at the level of individual cells,” he stated. “Understanding the dynamics of the epigenome, and its many roles in cell functions will revolutionize our knowledge about the relationship of genotype to phenotype and have wide relevance in understanding healthy and disease states in plants and people,” Ecker added.

These HHMI-GBMF appointments cap a keenly competitive selection process. Only 15 investigators were selected from the 239 plant scientists who applied for the competition, chosen on the basis of individual scientific excellence. With Joe Ecker’s appointment, three plant biologists at the Salk will have HHMI appointments.

About Joseph R. Ecker
Joe Ecker earned his Ph.D. in Microbiology at the Pennsylvania State University College of Medicine and carried out postdoctoral studies at Stanford University. He served on the faculty at the University of Pennsylvania (1987-2000) before joining the Salk Institute for Biological Studies, where he is a professor in the Plant Biology Laboratory and director of the Salk Institute Genomic Analysis Laboratory.

A member of the National Academy of Sciences, Ecker has been the recipient of multiple honors, including the 2011 George W. Beadle Award from the Genetic Society of America, 2007 John J. Carty Award for the Advancement of Science, Kumho Science International Award in Plant Molecular Biology and Biotechnology (2001), the International Plant Growth Substances Association Distinguished Research Award (2004), and the American Society for Plant Molecular Biology Martin Gibbs Medal (2005). He was chosen as the Scientific American 50: Research Leader of the Year in Agriculture in 2004.

The Howard Hughes Medical Institute
The Howard Hughes Medical Institute is dedicated to discovering and disseminating new knowledge in the basic life sciences. HHMI grounds its research programs on the conviction that scientists of exceptional talent and imagination will make fundamental contributions of lasting scientific value and benefit to mankind when given the resources, time, and freedom to pursue challenging questions. The Institute prizes intellectual daring and seeks to preserve the autonomy of its scientists as they pursue their research. In addition, through its grants program and other activities, HHMI is helping to enhance science education at all levels and maintain the vigor of biomedical science worldwide. www.hhmi.org

The Gordon and Betty Moore Foundation
The Gordon and Betty Moore Foundation, established in 2000, seeks to advance environmental conservation and scientific research around the world and improve the quality of life in the San Francisco Bay Area. The Foundation’s Science Program aims to make a significant impact on the development of provocative, transformative scientific research, and increase knowledge in emerging fields. www.moore.org