La Jolla, CA – In recent years, stem cell researchers have become very adept at manipulating the fate of adult stem cells cultured in the lab. Now, researchers at the Salk Institute for Biological Studies achieved the same feat with adult neural stem cells still in place in the brain. They successfully coaxed mouse brain stem cells bound to join the neuronal network to differentiate into support cells instead. 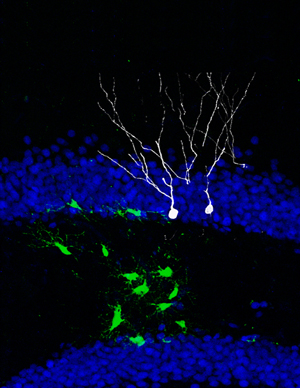 TOP: Throughout life, adult neural stem cells generate new brain cells in the dentate gyrus, the central part of the hippocampus, which is involved in the formation of memories and learning (shown in white). BOTTOM: Overexpression of a single gene changed the fate of neural stem cells bound to join the neuronal network in the brain. Instead they differentiated into glial support cells (shown in green).

The discovery, which is published ahead of print on Nature Neuroscience’s Web site, not only attests to the versatility of neural stem cells but also opens up new directions for the treatment of neurological diseases, such as multiple sclerosis, stroke and epilepsy, that not only affect neuronal cells but also disrupt the functioning of glial support cells.

“We have known that the birth and death of adult stem cells in the brain could be influenced by experience, but we were surprised that a single gene could change the fate of stem cells in the brain,” says the study’s lead author, Fred H. Gage, Ph.D., a professor in the Laboratory for Genetics and the Vi and John Adler Chair for Research on Age-Related Neurodegenerative Diseases.

Throughout life, adult neural stem cells generate new brain cells in two small areas of mammalian brains: the olfactory bulb, which processes odors, and the dentate gyrus, the central part of the hippocampus, which is involved in the formation of memories and learning.

After these stem cells divide, their progenitors have to choose between several options – remaining a stem cell, turning into a nerve cell, also called a neuron, or becoming part of the brain’s support network, which includes astrocytes and oligodendrocytes.

Astrocytes are star-shaped glia cells that hold neurons in place, nourish them, and digest parts of dead neurons. Oligodendrocytes are specialized cells that wrap tightly around axons, the long, hair-like extensions of nerve cell that carry messages from one neuron to the next. They form a fatty insulation layer, known as myelin, which speeds up electrical signals traveling along axons.

When pampered and cosseted in a Petri dish, adult neural stem cells can be nudged to differentiate into any kind of brain cell. But within their natural environment in the brain, career options of neural stem cells are thought to be mostly limited to neurons.

“When we grow stem cells in the lab, we add lots of growth factors resulting in artificial conditions, which might not tell us a lot about the in vivo situation,” explains first author Sebastian Jessberger, M.D., formerly a post-doctoral researcher in Gage’s lab and now an assistant professor at the Institute of Cell Biology at the Swiss Federal Institute of Technology in Zurich. “As a result we don’t know much about the actual plasticity of neural stem cells within their adult brain niche.”

To test whether stem cells in their adult brain environment can still veer off the beaten path and change their fate, Jessberger used retroviruses to genetically manipulate neural stem cells and their progeny in the dentate gyrus of laboratory mice. Under normal conditions, the majority of newborn cells differentiated into neurons. When he introduced the Ascl1, which had previously been shown to be involved in the generation of oligodendrocytes and inhibitory neurons, he successfully redirected the fate of newborn cells from a neuronal to an oligodendrocytic lineage.

“It was quite surprising that stem cells in the adult brain maintain their fate plasticity and that a single gene was enough to reprogram these cells,” says Jessberger. “We can now potentially tailor the fate of stem cells to treat certain conditions such as multiple sclerosis.”

In patients with multiple sclerosis, the immune system attacks oligodendrocytes, which leads to the thinning of the myelin layer affecting the neurons’ ability to efficiently conduct electrical signals. Being able to direct neural stem cells to differentiate into oligodendrocytes may alleviate the symptoms.

Researchers who also contributed to the study include postdoctoral researchers Nicolas Toni, Ph.D., Gregory D. Clemenson Jr, Ph.D., and Jasodhara Ray, Ph.D., all in the Laboratory of Genetics.