La Jolla, CA – In studies going back to the 1930’s, mice and many other species subsisting on a severely calorie-restricted diet have consistently outlived their well-fed peers by as much as 40 percent. But just how a diet verging on the brink of starvation extends lifespan has remained elusive.

Now, researchers at the Salk Institute for Biological Studies have cracked open the black box of how persistent hunger promotes long life and identified a critical gene that specifically links calorie restriction (CR) to longevity.

“After 72 years of not knowing how calorie restriction works, we finally have genetic evidence to unravel the underlying molecular program required for increased longevity in response to calorie restriction,” says Andrew Dillin, Ph.D., an associate professor in the Molecular and Cell Biology Laboratory, who led the study published online in the May 2 issue of Nature. 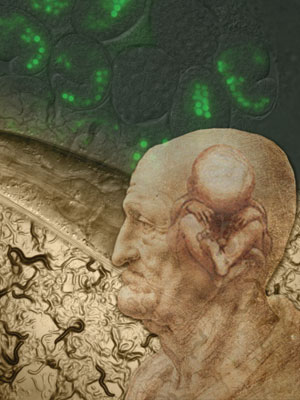 Initially, researchers thought that the effect of calorie restriction on aging was mediated through insulin-like signaling pathways in the roundworm Caenorhabditis elegans (C. elegans), but experiments by graduate student Siler Panowski in Dillin’s lab suggested otherwise.

In the worm, signals passed down the insulin/IGF-1 pathway regulate a DNA-binding protein called DAF-16 that belongs to what is called the forkhead family. It was believed that DAF-16 then regulated expression of genes associated with longevity. Dillin had also identified a co-regulator in the pathway called SMK-1 that apparently worked with DAF-16 to regulate longevity.

“When we asked whether DAF-16 and SMK-1 proteins were both necessary for CR-mediated longevity, DAF-16 turned out to be unnecessary but, somewhat surprisingly, SMK-1 was,” says first author Panowski.

Since 15 other forkhead-like factors are expressed in C. elegans, graduate student Suzanne Wolff and former post-doctoral fellow Hugo Aguilaniu, Ph.D., now an assistant professor at the École Normale Supérieure de Lyon, France, set out to determine if any of them teamed up with SMK-1 to delay aging in the CR-response. They did this by knocking out each gene separately and observing whether the genetically altered worms still showed enhanced longevity when calorie-restricted.

Loss of only one of the genes, a gene encoding the protein PHA-4, negated the lifespan-enhancing effect of calorie-restriction in worms. And, when researchers undertook the opposite experiment – by overexpressing pha-4 in worms – the longevity effect was enhanced. “PHA-4 acts completely independent of insulin/IGF-1 signaling and turns out to be essential for CR-mediated longevity,” says Panowski.

So far, only one other gene, called sir-2, has been implicated in the life- and health-prolonging response to calorie restriction. Increased amounts of SIR-2 protein extend longevity of yeast, worms, and flies, but while loss of sir-2 disrupts the calorie restriction response only in yeast, it has no effect on other organisms, such as worms.

“We know three distinct pathways that affect longevity: insulin/IGF signaling, calorie restriction, and the mitochondrial electron transport chain pathway, yet it is still not clear where sir-2 fits in. It seems to meddle with more than one pathway,” says Dillin and adds that “PHA-4 is specific for calorie restriction as it does not affect the other pathways.”

Humans possess three genes highly similar to worm pha-4, all belonging to what is called the Foxa family. All three play an important role in development and then later on in the regulation of glucagon, a pancreatic hormone that unlike insulin increases the concentration of blood sugar and maintains the body’s energy balance, especially during fasting.

The potential payoff for cutting to 60 percent of normal while maintaining a healthy diet rich in vitamins, minerals, and other nutrients, is huge. Currently it is the only strategy apart from direct genetic manipulation that consistently prolongs life and reduces the risk of cancer, diabetes, and cardiovascular disease, while staving off age-related neurodegeneration in laboratory animals from mice to monkeys. Although some people are already imposing this strict regimen upon themselves, it is too early tell whether calorie restriction will have the same effect in humans.

The work was funded by grants from the NIH, American Diabetes Association and the Ellison Medical Research Foundation.