New gene editing technique would heal patients with their own cells

New gene editing technique would heal patients with their own cells

LA JOLLA, CA—Researchers at the Salk Institute for Biological Studies have developed a way to use patients’ own cells to potentially cure sickle cell disease and many other disorders caused by mutations in a gene that helps produce blood hemoglobin.

The technique uses cells from a patient’s skin to generate induced pluripotent stem cells (iPSCs), which are capable of developing into various types of mature tissues—including blood. The scientists say their method, which repairs the beta-globin gene (HBB), avoids gene therapy techniques that can introduce potentially harmful genes into cells.

The new technique, which will soon be tested as a therapy in animals, also appears to be much more efficient than other methods tested to date, the researchers say.

“Our findings set the stage for the development of iPSC-based therapies for devastating genetic disorders such as sickle cell disease,” says the study’s principle investigator, Juan Carlos Izpisua Belmonte, a Salk professor in the Gene Expression Laboratory. 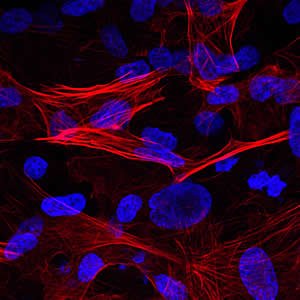 To assure that the skin cells were in fact reprogrammed into stem cells, the researchers coaxed them into becoming muscle cells, indicated by the presence of muscle-specific protiens (red) in this image. The cell nuclei—the central compartments that contain the DNA—are seen in blue.

Symptoms of sickle cell disease include swelling of the hands and feet, pain due to clogging of blood vessels, anemia and stroke.

The disorders are most common among people of African, Mediterranean and Middle Eastern decent. One in every 500 African Americans and one in every 30,000 Hispanic Americans are born with sickle cell disease, according to the Centers for Disease Control and Prevention.

The disease can be cured with stem cell or bone marrow transplants, but there is a high risk that recipients of transplants will reject the donated marrow or cells, which can result in serious side effects and even death.

The Salk researchers, which include co-first authors Mo Li and Keiichiro Suzuki, both research associates in Belmonte’s laboratory, set out to devise a safe method to use iPSCs to correct the HBB gene in patients who have defective copies of the gene.

Because the iPSCs come from a patient’s own body, they should carry less risk for transplant rejection. Also, about 500 other disease-causing mutations have been identified in the HBB gene, so correcting the gene could potentially cure a multitude of HBB-related diseases worldwide.

However, traditional iPSC generation and gene therapy techniques have proven to be potentially unsafe, according to the researchers.

Many have used viruses to convert adult cells to stem cells and to carry a normal HBB gene to infect and repair hematopoietic stem cells—stem cells that give rise to all blood cells.

But when these repaired stem cells are given back to patients, they can include transgenes—unwanted genes that have become inserted into the host genome and disrupt the normal function of DNA. The technique is also inefficient, correcting only a small percentage of gene mutations, and transplantation success has proven rare in clinical trials testing gene therapy to treat beta thalassemia.

“We wanted to fix the mutation in such a way that it does not leave any unwanted traces in a patient’s genome,” Suzuki says.

To do that, the researchers used a two-step approach. First, they took adult skin cells from a patient with an HBB mutation that causes sickle cell disease. They used six genes to coax these cells to revert to iPSCs, which could then be developed into blood cells. The genes were introduced into the cells using a technique that avoids the use of viruses and insertion of transgenes into the cells’ genome.

Their next step was to repair the HBB gene mutation in the stem cells. To swap the defective gene with a normal copy in the iPSCs, the investigators used a modified adenovirus (common cold virus) that, unlike viruses used in other methods, does not replicate itself in the body and does not alter the host cells’ DNA. The viral genes were deleted and replaced with a DNA sequence that contained a normal HBB gene.

The modified virus then delivered the new genetic material inside the iPSCs, where the DNA region containing the broken gene was replaced with the sequence containing the normal gene. “It happens naturally, working like a zipper,” Li says. “The good gene just zips in perfectly, pushing the bad one out.”

By replacing a relatively large region of DNA, the technique allows the scientists to fix many gene mutations at once, which suggests the method might provide a way to treat hundreds of types of HBB-related diseases. The correction of the mutant HBB gene was also highly efficient and the research team conducted multiple tests to ensure no errant genes were integrated into the genome.

The Salk scientists now plan to make blood cells from the repaired stem cells and test their effectiveness in animals. If successful, this may lead to therapies for humans in which a patient’s stem cells will be reverted into iPSCs, then genetically repaired and transplanted back into the bone marrow of the same patient. If successful, the bone marrow will then produce all new blood cells, including normal hemoglobin.

If the technique proves effective, the researchers say, it might be used for treating other types of diseases caused by single gene mutations.

The study was funded by grants from the G. Harold and Leila Y. Mathers Charitable Foundations, Sanofi-Aventis, Ellison Medical Foundation, The Leona M. and Harry B. Helmsley Charitable Trust, MICINN and Fundacion Cellex (JCIB). The study appears in the December 2011 issue of Cell Research.