La Jolla, CA – Researchers at the Salk Institute for Biological Studies have developed a versatile mouse model of glioblastoma—the most common and deadly brain cancer in humans—that closely resembles the development and progression of human brain tumors that arise naturally.

“Mouse models of human cancer have taught us a great deal about the basic principles of cancer biology,” says Inder Verma, Ph.D., a professor in the Laboratory of Genetics. “By definition, however, they are just that: approximations that simulate a disease but never fully capture the molecular complexity underlying disease in humans.” 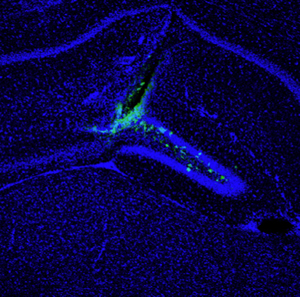 Trying to mimic randomly occurring mutations that cause glioblastoma, Inder Verma and his team successfully used modified viruses to shuttle cancer-causing oncogenes into a handful of cells in the brains of adult mice. Individual cell nuclei are shown in blue, infected cells are shown in green.

Trying to mimic randomly occurring mutations that lie at the heart of all tumors, the Salk researchers used modified viruses to shuttle cancer-causing oncogenes into a handful of cells in adult mice. Their strategy, described in the Jan. 4, 2009 issue of the journal Nature Medicine, could not only prove a very useful method to faithfully reproduce different types of tumors but also to elucidate the nature of elusive cancer stem cells.

The most frequently used mouse cancer model relies on xenografts: Human tumor tissue or cancer cell lines are transplanted in immuno-compromised mice, which quickly develop tumors. “These tumors are very reproducible, but this approach ignores the fact that the immune system can make or break cancer,” says first author Tomotoshi Marumoto, Ph.D., a former postdoctoral researcher in the Verma lab and now an assistant professor at the Kobe Medical Center Hospital in Kobe, Japan. Other animal models either express oncogenes in a tissue-specific manner or shut down the expression of tumor suppressor genes in the whole tissue. “But we know that tumors generally develop from a single cell or a small number of cells of a specific cell type, which is one of the major determinants of the characteristics of tumor cells,” explains postdoctoral researcher and co-author Dinorah Friedmann-Morvinski.

To sidestep the shortcomings of currently used cancer models, the Salk team harnessed the power of lentiviral vectors to infect nondividing as well as dividing cells and ferry activated oncogenes into a small number of cells in adult, fully immunocompetent mice. After initial experiments confirmed that the approach was working, Marumoto injected lentiviruses carrying two well-known oncogenes, H-Ras and Akt, into three separate brain regions of mice lacking one copy of the gene encoding the tumor suppressor p53: the hippocampus, which is involved in learning and memory; the subventricular zone, which lines the brain’s fluid-filled cavity; and the cortex, which governs abstract reasoning and symbolic thought in humans.

He specifically targeted astrocytes, star-shaped brain cells that are part of the brain’s support system. They hold neurons in place, nourish them, digest cellular debris, and are suspected to be the origin of glioblastoma. Within a few months, massive tumors that displayed all the histological characteristics of glioblastoma multiforme preferentially developed in the hippocampus and the subventricular zone.

The ability of adult stem cells to divide and generate both new stem cells (called self-renewal) as well as specialized cell types (called differentiation) is the key to maintaining healthy tissues. The cancer-stem-cell hypothesis posits that cancers grow from stem cells in the same way healthy tissues do. Known as tumor-initiating cells with stem like properties these cells have many characteristics in common with normal stem cells in that they are self-replicating and capable of giving rise to populations of differentiated cells.

“They displayed all the characteristics of cancer stem cells, and less than 100 and as few as 10 cells were enough to initiate a tumor when injected into immunodeficient mice,” says Friedmann-Morvinski. Most xenograft models for brain tumors using tumor cell lines require at least 10,000 cells.

“These findings show that our cancer model will not only allow us to start understanding the biology of glioblastoma but will also allow us to answer many questions surrounding cancer stem cells,” says Verma. Although the work described to date pertains to glioblastoma, Verma and his team are currently using this methodology to investigate lung, pancreatic, and pituitary cancers.

Authors who also contributed to the work include Ayumu Tashiro, Ph.D., at the Kavli Institute for Systems Neuroscience at the Medical Technical Research Center in Trondheim, Norway; Miriam Scadeng, Ph.D., at the UCSD Center for Functional MRI in La Jolla; Yasushi Soda, Ph.D.; and Fred H. Gage in the Laboratory of Genetics at the Salk Institute.

This work was supported by the National Institutes of Health and in part by the H. N. and Frances C. Berger Foundation.