Model should have widespread application for pharmaceutical research

Model should have widespread application for pharmaceutical research

LA JOLLA, CA—Schizophrenia is one of the most devastating neurological conditions, with only 30 percent of sufferers ever experiencing full recovery. While current medications can control most psychotic symptoms, their side effects can leave individuals so severely impaired that the disease ranks among the top ten causes of disability in developed countries.

Now, in this week’s issue of the Proceedings of the National Academy of Sciences, Thomas Albright and Ricardo Gil-da-Costa of the Salk Institute for Biological Studies describe a model system that completes the bridge between cellular and human studies of schizophrenia, an advance that should help speed the development of therapeutics for schizophrenia and other neurological disorders.

“Part of the terror of schizophrenia is that the brain can’t properly integrate sensory information, so the world is a disorientating series of unrelated bits of input,” says Albright, the Conrad T. Prebys Chair in Vision Research. “We’ve created a model that tests the ability to do sensory integration, which should be extremely useful for pharmaceutical research.” 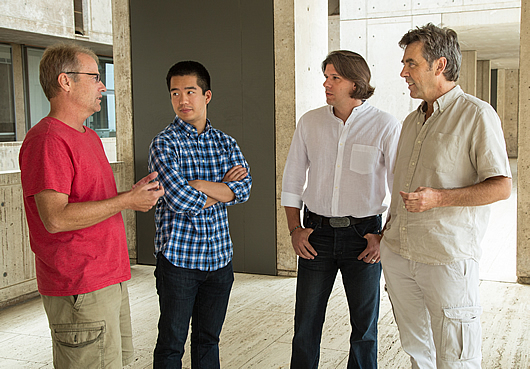 Currently, over 1.1 percent of the world’s population has schizophrenia, with an estimated three million individuals in the United States alone. The economic cost is high: In 2002, Americans spent nearly $63 billion on treatment and managing disability. The emotional cost is higher still: Ten percent of those with schizophrenia are driven to commit suicide by the burden of coping with the disease.

Initially, it was thought that excessive amounts of the neurotransmitter dopamine caused psychotic symptoms, and indeed, current anti-psychotic drugs work by blocking dopamine from entering brain cells. But nearly all of these drugs have severe cognitive side effects, which led researchers to speculate that some other mechanism must also be involved.

A major clue to understanding schizophrenia came with the development of phencyclidine (PCP) in 1956. It was intended to keep patients safely asleep during surgeries, but many woke up with symptoms similar to those experienced by people with schizophrenia, including hallucinations and the disorientation of feeling “dissociated” from their limbs, resulting in PCP being abandoned for clinical purposes. A decade later, it was replaced by a derivative called ketamine. At doses high enough to put patients to sleep, ketamine is an effective anesthetic. At lower doses, it temporarily produces the same schizophrenia-like effects as PCP.

The two drugs are part of a class called N-methyl-D-aspartate receptor antagonists. Essentially, they work by gumming up the mechanism by which glutamate, the main excitatory neurotransmitter, would enter brain cells. Thus, it is clear that dopamine dysfunction accounts for some of the symptoms of psychosis, although that is probably not the full story.

“While dopamine has limited reach in the brain, any dysfunction in glutamate would be expected to have the sort of widespread effects we see in the perceptual disorders associated with schizophrenia,” says Albright. “Nevertheless, which neurotransmitter was primary to these disorders—glutamate or dopamine—has been argued about for years.”

Standing in the way of a definitive answer was a researcher’s Catch-22: Many experiments designed to understand cognitive disorders such as schizophrenia or Alzheimer’s require a participant’s conscious attention-yet these disorders interfere with attention.

To get around this, scientists turned to electroencephalograms (EEGs), which can be used to detect changes in cases where a subject is not consciously paying attention to a stimulus, by recording the brain’s electrical signals through electrodes placed in a scalp cap. In one test, a series of tones is played, but an “oddball” tone breaks the pattern in the sequence. A healthy brain can still easily spot the differences, even if a participant is concentrating on another task, such as reading a magazine.

“The test works because the brain is a prediction machine-it’s built to anticipate what should come next,” says Albright. “If you have healthy working memory, you should be able to perceive a pattern and notice when something violates it, but patients suffering from some mental health disorders lack that basic ability.”

In their latest research, Albright’s team detected the difference through two signals, event-related brain potentials called mismatch negativity (MMN) and P3. The MMN reflects differential brain activity to the detected oddball tone, below the level of conscious awareness. P3 picks up the next phase: a subject’s attention orientation to the oddball tone.

Still, a gap in understanding remained. While scientists could do cellular work in animal models on the role of dopamine versus glutamate, and they could do EEGs in human beings, a bridge between the two remained elusive. Such a bridge can help scientists understanding of how healthy and disordered brains work from the cellular level all the way to the multiple interactions between brain areas. Moreover, it can enable pre-clinical and clinical trials linking cellular and systems levels for successful therapeutic avenues.

Gil-da-Costa has at last crossed the bridge by crafting the first non-invasive scalp EEG setup that records accurately from the brains of non-human primates, with the same proportional density of electrodes as a human cap and no distortions in signal caused by an incorrect fit. This setup allows him to get accurate measurements of MMN and P3, with the same protocols that are followed in humans. As a result, the lab has come closer than ever before to untangling the roles of dopamine and glutamate.

“While rodents are essential for understanding mechanisms at a cellular or molecular level, at a higher cognitive level, the best you could do was a sort of rough analogy. Now, finally, we can have a one-to-one correspondence,” says Gil-da-Costa. “For sensory integration, our findings with this model support the glutamate hypothesis.”

Pharmaceutical companies are interested in the model, because of the potential for more precise testing and the universality of the MMN/P3 assays. “These brain makers are the same across dozens of neurological diseases, as well as brain trauma, so you can test potential therapies not just for schizophrenia, but for conditions such as Parkinson’s, Alzheimer’s, bi-polar disorder, and traumatic brain injuries,” says Gil-da-Costa. “We hope this will help begin a new era in neurological therapeutics.”

Other researchers on the study were Gene R. Stoner and Raynard Fung of the Salk Institute for Biological Studies.

This work was supported by the National Eye Institute, the Salk Institute Innovation Grants Program and a Catharina Foundation award.