LA JOLLA, CA—Drug developers have long been looking for agents that will target a cell receptor that regulates stress in humans, but no small molecule drugs have successfully gone through clinical studies. Now, a team at the Salk Institute has demonstrated how a novel tool can be used to map the binding sites on this receptor, which they say could speed the design of effective therapies.

In the July 12th online international issue of Angewandte Chemie, the researchers published a method demonstrating how unnatural amino acids (Uaas) can be used to map the structure of a corticotropin-releasing hormone receptor (CRF-R1). They also show how this new tool helped locate three areas on the receptor to which peptide hormones can dock to activate or inhibit the receptor. Many other so-called natural ligand binding sites are predicted to exist on the receptor. 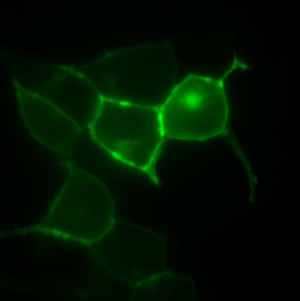 A non-natural amino acid is inserted in the GPCR, expressed at the cell membrane, to capture ligands.

“As important as this receptor is to regulating human stress, no one knows how it is exactly arranged in the cell membrane, which is key to understanding how it functions and how it can be manipulated in drug therapy,” says the study’s first author, Dr. Irene Coin, Ph.D. “We have created a method that provides new insights into how peptides interact with this receptor.”

Not only is this method useful to understanding the specific function of CRF-R1, it can be adapted to map the interaction of other G-protein-coupled receptors (GPCRs), a large family of proteins of which CRF-R1 is a member, says the study’s senior author, Dr. Lei Wang, assistant professor and Frederick B. Rentschler Developmental Chair in the Chemical Biology and Proteomics Laboratory.

“There are hundreds of GPCRs in the human body, and they are the molecular target of more than 30% of today’s pharmaceuticals,” says Wang. “This technology has enormous potential for addressing fundamental biological questions regarding the many different classes of GPCRs, and for guiding the design of exquisitely specific agents where they are needed.”

The study evolved from several fundamental Salk discoveries. The first is the 1981 discovery and cloning of the CRF receptor by Salk researcher Dr. Wylie Vale, who is a co-author on this study. The receptor binds on to the coricotropin-releasing hormone, which mediates endocrine, autonomic, behavioral, and immune responses to stress.

The second innovation is the development of Uaas technology by Wang and his colleagues. It was first used in bacteria in 2001 and then in mammalian cells in 2007. This study is the first to report its application in comparing the behavior of different ligands at the receptor in live mammalian cells.

Coin, who was trained in Germany, joined Wang’s laboratory as a postdoctoral fellow to lead the study. “This is one of the few labs in the world that can do this kind of research on mammalian cells,” she says. “And in Vale’s lab there is unbeatable expertise in the biological testing of the mutant receptors.”

The tool the researchers use consists of three different molecules, all of which are synthetically engineered. One is a synthetic transfer RNA (tRNA) that cells use to incorporate amino acids into a protein that is being built inside a cell. The second molecule is an enzymatic synthetase that can recognize the engineered tRNA, and load it with the third engineered molecule – an unnatural amino acid. These amino acids are chemically distinct from the 20 amino acids that naturally exist in the body; they can be engineered for different desirable properties, such as to fluoresce or to chemically react upon exposure to light.

Because the researchers know the amino acid sequences of the CRF-R1, they modified the DNA at specific sites that they believed might be near ligand binding sites. The engineered tRNA and synthetase worked together to implant an unnatural amino acid at these sites. “We can control the positions that this unnatural amino acid end up in, and we put them where we think there might be a binding site, based on some clues from other data,” says Coin. After adding radiolabeled natural ligands to cells expressing the receptor, the researchers then shine light, which triggers the unnatural amino acid to capture the ligand if the latter is close by. “We can now tell if the ligand binds close to a particular site of the receptor or not,” she says.

In this way, different mutants displaying an unnatural amino acid in a different structural position on the receptor can be engineered. “This is a way to map the surface of the receptor to see which positions are close to ligands,” Coin says.

Different ligands may bind in different places on the receptor, so the technology can be used to eventually build a complete map of all the ligand-specific binding sites on the receptor, Wang says. With that knowledge, drugs can eventually be shaped that specifically adhere to the targeted binding pocket, he says.