LA JOLLA, CA—Lora B. Sweeney, a postdoctoral researcher at the Salk Institute for Biological Studies has been named a Damon Runyon Fellow.

The Damon Runyon Cancer Research Foundation, a non-profit organization focused on supporting innovative early career researchers, selected Sweeney as one of only 18 recipients at its fall Fellowship Award Committee review. The prestigious $156,000 award is intended to encourage the nation’s most-promising young investigators to pursue careers in cancer research by providing them with independent funding to work on innovative projects. 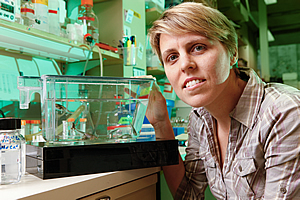 Sweeney was sponsored by Christopher R. Kintner, professor of the Molecular Neurobiology Laboratory at the Salk Institute and Thomas M. Jessell, a Salk Fellow (NRF) and professor in the Department of Biochemistry and Molecular Biophysics of Columbia University in New York.

As a NRF, Jessell is part of an elite group of scientists nominated by the Salk President and faculty who serve as Salk investigators for renewable six-year terms, advising the institute on appointments, promotions and scientific programs.

Sweeney is using the frog as a model to study how neurons diversify in the spinal cord as limbs develop and a swimming tadpole becomes a hopping frog. Many different types of nerve cells, each with their own unique characteristics, make up the healthy nervous system. Understanding how a cell’s fate is specified will provide the basis for understanding how cancer reprograms a cell.

“I hope tracking the same course as evolution—from swimming to limb-based movement—in a single organism that we reveal new principles of neuron identity, organization and ultimately, function,” said Sweeney. “As one of the first scientists to work on the metamorphic frog, we are developing a new system. It is wonderful to have the support of Damon Runyon on this pioneering journey.”

Damon Runyon Cancer Research Foundation
To accelerate breakthroughs, the Damon Runyon Cancer Research Foundation provides today’s best young scientists with funding to pursue innovative research. The Foundation has gained worldwide prominence in cancer research by identifying outstanding researchers and physician-scientists. Eleven scientists supported by the Foundation have received the Nobel Prize, and others are heads of cancer centers and leaders of renowned research programs. Each of its award programs is extremely competitive, with less than 10% of applications funded. Since its founding in 1946, the Foundation has invested over $240 million and funded more than 3,300 young scientists. This year, it will commit approximately $10.8 million in new awards to brilliant young investigators.

100% of all donations to the Foundation are used to support scientific research. Its administrative and fundraising costs are paid from its Damon Runyon Broadway Tickets Service and endowment.