LA JOLLA—Salk Institute plant biologist Julie Law has been named a Rita Allen Foundation Scholar, a distinction given to biomedical scientists whose research holds exceptional promise for advancing the frontiers of knowledge about how biological systems function in health and disease. 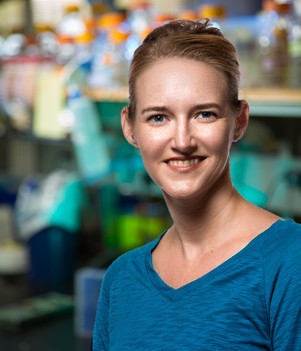 Law, an assistant professor in Salk’s Plant Molecular and Cellular Biology Laboratory and Hearst Foundation Development Chair, was one of seven scientists the Rita Allen Foundation named to its 2015 class of Rita Allen Foundation Scholars. The selected scholars will receive grants of up to $110,000 per year for a maximum of five years to conduct innovative research on brain development, antiviral immunity, gene regulation mechanisms, and the interplay of cancer, inflammation and chronic pain.

Law and the other scholars were chosen for their bold approaches to basic scientific questions that address problems of global concern, as well as their potential for learning, leadership and collaboration.

“By investing in outstanding biomedical scientists at the early stages of their careers, we are providing resources to these scholars to pioneer new approaches and discoveries,” says Elizabeth Christopherson, president and chief executive officer of the Rita Allen Foundation. “Their discoveries will help to illuminate how our brains grow and change, how our genetic materials stay intact, and how our immune systems both fend off infections and propagate pain. Researching these basic biological questions is essential to improve human health and alleviate suffering caused by cancer, chronic pain, mental illness and other maladies.”

Law’s research focuses on the complicated and cryptic realm of chromatin–the dynamic combination of proteins, small RNAs and other molecules that surround genomic DNA and play key roles in controlling its expression and stability. After an initial fascination with the myriad roles of RNAs in gene regulatory processes, Law says, “I became hooked on chromatin. And now it seems that everywhere I look there’s an important biological process with links to chromatin.”

To investigate how chromatin modifications impact genome stability and development, Law and her team genetically manipulate chromatin components in the plant Arabidopsis thaliana. A humble member of the mustard family, A. thaliana has been a go-to organism for studying the fundamental biology of plants since the 1960s. Importantly, plants are able to tolerate mutations that disrupt chromatin structure and function, whereas in animals, analogous mutations are often lethal. This makes plants an excellent system to investigate chromatin-based processes that are conserved across eukaryotic organisms.

The genomes of both plants and animals are under constant threat from jumping genetic elements and radiation from the sun, among other internal and external assaults. Law plans to examine how chromatin modifications and small RNAs influence the stability of the Arabidopsis genome. “The goal is to understand how genome stability is achieved under normal conditions,” she says. “Such knowledge will be critical in determining how alterations in chromatin can lead to developmental defects and disease.”

Law’s research team will combine classical genetics with fluorescence imaging and newly developed genome editing techniques to decipher the complex processes involved in maintaining genome stability. “We hope that a greater understanding of these processes will ultimately lead to the development of new tools that can be used to correct chromatin defects,” she says.

Since 1976, the Rita Allen Foundation has invested in nearly 150 basic biomedical scientists at the early stages of their careers, enabling them to pursue research directions with above-average risk and promise. Scholars have gone on to make transformative contributions to their fields of study, and have won recognition including the Nobel Prize in Physiology or Medicine, the National Medal of Science, the Wolf Prize in Medicine, and the Breakthrough Prize in Life Sciences.