LA JOLLA, CA—The Salk Institute for Biological Studies is pleased to announce that Nobel Laureate and distinguished Salk research professor Renato Dulbecco, has been awarded the President’s Medal for Excellence by Indiana University.

One of the highest honors an IU president can bestow, the award was first presented on Sept. 20, 1985, to members of the Beaux Arts Trio. Criteria for recipients include distinction in public service, service to IU, achievement in a profession and extraordinary merit and achievement in the arts, humanities, science, education and industry. 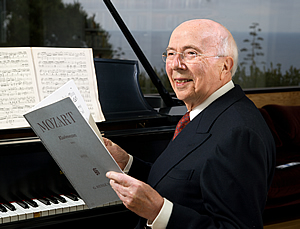 “Renato Dulbecco is a brilliant investigator and scientific visionary,” said Salk President William R. Brody. “His extraordinary contributions to science epitomize everything the President’s Medal stands for and we are delighted that Indiana University has recognized his remarkable achievements with this award.”

A Founding Fellow of the Salk Institute and President Emeritus, Dr. Dulbecco was one of four Nobel Laureates who worked together at IU in the life sciences during the late 1940s. He is credited with playing a pivotal role in the development of modern molecular biology and revealing the biochemical basis of our genetic codes.

Dulbecco’s seminal research provided the first clue to the genetic nature of cancer and he was jointly awarded the 1975 Nobel Prize in Physiology or Medicine and for discoveries concerning the interaction between tumor viruses and the genetic material of the cell.

His research revealed how a virus could insert its own genes into the chromosome of the cell it infects and “turn on” the uncontrolled growth that is the hallmark of cancer. This was the first solid evidence that cancer originates when a cell’s genes become mutated, or co-opted, and the breakthrough transformed the way scientists viewed cancer. Dulbecco’s study gave a basis for precise understanding of the molecular mechanisms by which cancer cells propagate, thus allowing future researchers to better understand and fight the disease.

In 1986, Dulbecco initiated the idea of studying all human genes, helping to launch the worldwide Human Genome Project.

Dr. Dulbecco is the recipient of numerous awards and honors, including the Lasker Award and those given by the National Academy of Sciences, the Royal Society of London and the Academia Del Lincei of Italy. To highlight his achievements, the Salk Institute established the Dulbecco Laboratories for Cancer Research in 2005 and created the Renato Dulbecco Chair in Genomics in 2010.