La Jolla, CA – Dr. Samuel L. Pfaff, a professor in the Molecular Neurobiology Laboratory at the Salk Institute for Biological Studies, has been awarded the prestigious Senator Jacob Javits Award in the Neurosciences for his pioneering work on the molecular pathways that shape the embryonic central nervous system. The award guarantees funding for up to seven years.

Over the first four years, Pfaff and his research team will receive $2 million from the National Institute of Neurological and Communicative Disorders and Stroke (NINDS). The funding will enable them to continue their work on the molecular “zip code” on the growing end of nerve cells that guides them to their correct “address” on the muscle, a process called neuronal pathfinding. 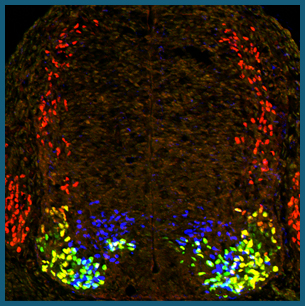 Skeletal muscle consists of thousands of muscle fibers, each controlled by one motor neuron whose cell body lies in the brain or spinal cord. Connections between muscle and nerve cells are established embryonically when newborn neurons extend axons to “wire” the appropriate muscle fiber. The wiring process is highly orchestrated – each motor neuron has already pledged allegiance to a particular muscle fiber before it reaches out to connect with its predetermined partner.

Pfaff is trying to specify the genes within neuronal stem cells that determine the future identity of nerve cells. This process equips growing nerve cells with the “molecular toolbox” that allows them to recognize and follow the cues that lead them to their predestined target.

Neural stem cells can now be coaxed to develop into motor neurons in a test tube and have the potential to repair spinal cord injuries. “It is not enough to make the right cell type, you need to connect them to the right target,” explains Pfaff. But the environment in a fully-grown adult body is very different from a tiny embryo and most cues that guide immature motor neurons during embryonic development will be missing.

“When we understand how the embryonic nervous system is assembled, we might be able to use nature’s tricks to help restore movement in people following spinal injury or those with motor neuron diseases such as Lou Gehrig’s disease, spinal muscle atrophy, and post-polio syndrome,” he says. Failure to establish proper connectivity in the brain may also underlie autism spectrum disorders and mental retardation.

Pfaff, 46, received his doctorate in molecular biology from the University of California at Berkeley in 1988 after undergraduate studies at Carleton College in Minnesota. After completing post-doctoral research studies at Vanderbilt University and at the Center for Neurobiology and Behavior at Columbia University, New York, he was recruited to the Salk Institute in La Jolla in 1996.

In 1997, Pfaff was selected as a McKnight Scholar, an endowed fund that supports neurobiologists. He is also a Pew Scholar and a recipient of the Basil O’Connor award from the March of Dimes Birth Defects Foundation. He is a member of the Scientific Advisory Committee for the Christopher Reeves Paralysis Foundation, the March of Dimes Basil O’Connor Scholar Awards and the National Institute for Child Health and Human Development and is the Editor-in-Chief for the journal Molecular and Cellular Neuroscience.

About the Javits Neuroscience Investigator Award

Authorized by the United States Congress for research in the neurosciences, the Javits Award is named in honor of the late Senator Jacob K. Javits of New York, who, before his death in 1986, suffered from the degenerative neurological disorder amyotrophic lateral sclerosis, commonly called Lou Gehrig’s disease. The senator was a strong advocate for research into a variety of disorders of the brain and nervous system.

The Javits Neuroscience Investigator Award is a merit award that is given to distinguished investigators who have a record of substantial contributions on the “cutting edge” of neurobiology and who can be expected to be highly productive for the next seven years.

About the Salk Institute

Internationally renowned for its groundbreaking basic research in the biological sciences, the Salk Institute was founded in 1960 by Dr. Jonas Salk, five years after he developed the first safe and effective vaccine against polio. The Institute’s 59 faculty members are scientific leaders in the fields of molecular biology, neurosciences and plant biology. For more information about the Salk Institute, visit www.salk.edu