LA JOLLA—Janelle Ayres, assistant professor at Salk Institute’s Nomis Foundation Laboratories for Immunobiology and Microbial Pathogenesis, has received the prestigious Searle Scholar award, which each year is given to only 15 researchers in the fields of chemical and biological sciences.

The scholarship provides $300,000 to support scientific research for each scholar over the next three years. This year, 172 applications were considered from recently appointed assistant professors, nominated by 120 universities and research institutions.

Ayres’ work focuses on the trillions of bacteria that live in intestines and are responsible for health and wellness. Many diseases occur when that microbial system is thrown out of whack and “bad” bacteria take over. Using antibiotics to fight infections has limitations: besides not working for all diseases, antibiotics also kill good bacteria and contribute to multi-drug resistant harmful bacteria (“super bugs”). 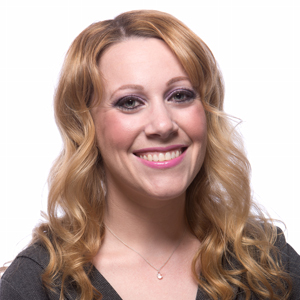 Ayres focuses on an entirely new approach to therapeutics by investigating how helpful microflora could be leveraged to combat the effects of harmful bacteria in place of or in addition to antibiotic treatment. Rather than attempting to eliminate the bad bacteria itself, she is using beneficial bacteria to target and control the damage generated during infections (for example, diarrhea and rapid weight loss pathologies), thereby giving an organism’s immune system time to clear out the infection.

By studying how to engineer microbes that can colonize the intestine while providing beneficial effects, researchers may be able to provide new treatments for infectious diseases and inflammatory diseases, as well as pathologies associated with cancer and aging.

The final selection of Searle Scholars was based on recommendations made by the program’s scientific advisory board, consisting of 12 scientists distinguished for their research and leadership across a wide range of fields. In selecting the Scholars, the board looked for scientists who have already demonstrated innovative research with the potential for making significant contributions to chemical and biological research over an extended period of time.

The funds that support the awards come from trusts established under the wills of John G. and Frances C. Searle. Mr. Searle was President of G.D. Searle & Co., of Skokie, Illinois, a research-based pharmaceutical company. Mr. and Mrs. Searle expressed the wish that some of the proceeds of their estates be used for the support of research in medicine, chemistry, and the biological sciences.

In 1980, members of the Searle family acting as Consultants to the Trustees of the Trusts established under the wills of Mr. & Mrs. John G. Searle recommended the development of a program to support young biomedical scientists. This idea evolved into the Searle Scholars Program, which is funded through grants from the family trusts to the Chicago Community Trust and administered by Kinship Foundation in Chicago, Illinois.