Findings may lead to new targets for cancer treatment

Findings may lead to new targets for cancer treatment

LA JOLLA—Scientists at the Salk Institute for Biological Studies have identified a key genetic switch linked to the development, progression and outcome of cancer, a finding that may lead to new targets for cancer therapies.

The switch, a string of nucleotides dubbed a long non-coding RNA (lncRNA), does not code for proteins like regular RNA. Instead, the scientists found, this particular lncRNA acts as an on/off switch for a key gene whose excessive activity is tied to inflammation and cancer, COX-2. 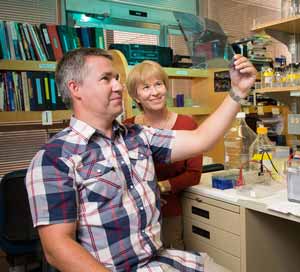 The COX-2 gene mediates inflammation, which in most cases helps our bodies eliminate pathogens and damaged cells. But inflammation also has a dark side: it aids growth and spread of tumors in the early stages of cancer. By learning more about how COX-2 is affected, scientists may be able to provide a potential target for future cancer treatment.

“Deciphering the mechanism of COX-2 gene regulation is of great clinical interest,” says senior author Beverly Emerson, a professor in Salk’s Regulatory Biology Laboratory and holder of the Edwin K. Hunter Chair. “COX-2 is instrumental in the development of several types of cancer, including colon, breast and prostate cancer. Strategies that specifically modulate COX-2 activity could be an attractive treatment approach.”

The findings of the study were published on April 29 in the open-access online journal eLife.

The function of lncRNAs is not well understood, but evidence increasingly points to their role in regulating gene expression, as they are found overexpressed in esophageal, colorectal and breast cancers.

Using human mammary epithelial cells, Emerson and Michal Krawczyk, a senior scientist in Salk’s Regulatory Biology Laboratory, discovered that an lncRNA called PACER (p50-associated COX-2 extragenic RNA) teams up with molecules that change the activity of the COX-2 gene. The scientists demonstrated that PACER kicks a molecule called p50 off of the COX-2 gene, causing COX-2 to go into overdrive. This is the first time scientists have shown that non-coding RNAs must be activated in order to squelch the activity of p50, a gene repressor. In turn, says Krawczyk, blocking p50 promotes the assembly of molecular activators of gene expression, which ramp up COX-2 activity.

The Salk scientists were also surprised to note an additional potential role for PACER-induced COX-2 activation in cancer. Early in the disease process, instead of activating the immune system to clear malignant cells from the body, COX-2 aids the growth and spread of tumors. In later stages of disease, however, Krawczyk says cancer cells often shut off COX-2 activity, as if at that stage COX-2 is no longer beneficial for tumor growth because it exposes spreading tumor cells to the immune system. That presents the opportunity to trigger COX-2 expression via PACER in late-stage cancers to aid immune system clearance of metastatic cells.

“This could be a potential treatment for late-stage cancers,” says Krawczyk. “We could possibly use small molecules to reactivate COX-2 activity, or perhaps even supply PACER itself, to fight the disease.”

The work was supported by the National Institutes of Health, the Chambers Medical Foundation and the GemCon Foundation.

About the Salk Institute for Biological Studies
The Salk Institute for Biological Studies is one of the world’s preeminent basic research institutions, where internationally renowned faculty probe fundamental life science questions in a unique, collaborative, and creative environment. Focused on both discovery and on mentoring future generations of researchers, Salk scientists make groundbreaking contributions to our understanding of cancer, aging, Alzheimer’s, diabetes and infectious diseases by studying neuroscience, genetics, cell and plant biology, and related disciplines.