LA JOLLA, CA—Lending credence to the popular notion that good things come in threes, Salk Institute professor Fred “Rusty” Gage, Ph.D. recently was recognized with a trio of honors on two continents: Spain’s Cátedra Santiago Grisolía Award 2011, an honorary doctorate in medicine from Lund University in Sweden and appointment as president of the International Society for Stem Cell Research (ISSCR).

Each acknowledges the pivotal role that Gage, a professor in the Salk Institute Laboratory of Genetics and holder of the Vi and John Adler Chair for Research on Age-Related Neurodegenerative Diseases, has played in advancing our knowledge of neurobiology. Through a groundbreaking experiment in 1998, Gage’s lab showed that, contrary to decades of common wisdom, human brains grow new neurons throughout life, a discovery that forced scientists to rethink some of their most basic ideas about how the brain works. He and his team also showed that physical exercise can enhance the growth of new nerve cells in the brain, a process called neurogenesis. 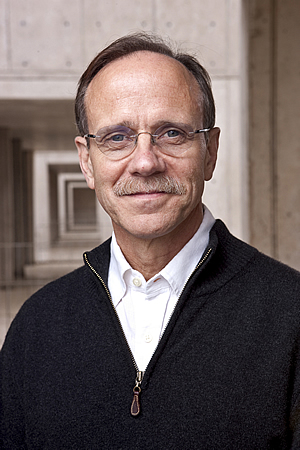 Gage’s research concentrates on the adult central nervous system and the unexpected plasticity and adaptability that remain throughout the life of all mammals. He and his team are currently working to understand how small populations of immature nerve cells that are found in the adult mammalian brain can be induced to become mature nerve cells. They are exploring how these cells can be activated in the damaged and diseased brain to be activated to replace or repair brain tissue lost in neurodegenerative disorders such as Alzheimer’s disease, Parkinson’s disease as well as Psychiatric diseases such as Autism and Schizophrenia.

“Rusty is a trailblazer in science. He has a brilliant mind, a creative style and is an inspiring leader who conducts cutting-edge research with clear human impact,” said Salk Institute president William R. Brody. “His landmark research upended traditional beliefs about the brain, and his recent work is shedding new light on the role of environment and physical and mental enrichment in enhancing neurogenesis.”

Created 12 years ago, Spain’s Cátedra Santiago Grisolía Prize is conferred annually on two internationally distinguished researchers in recognition of work that is of both high scientific and social interest. Gage, along with fellow recipient Mario Capecchi, a molecular geneticist and a co-winner of the 2007 Nobel Prize in Physiology or Medicine, was selected for the award by an advisory board made up of highly accredited professionals. They were honored in a public ceremony on May 3, 2011 in Valencia, Spain, where they were each presented with a silver medal.

On May 27, Gage also received an honorary doctorate in medicine from Lund University in Sweden, where he served as an associate professor from 1981 to 1985. Founded in 1666, Lund University is one of the largest, oldest universities in Scandinavia and is consistently ranked among the world’s top 100 universities.

Gage’s appointment as president of the International Society for Stem Cell Research is extremely fitting. Known worldwide as one of the leading experts on stem cell research, his yearlong term will begin in mid-June at the society’s annual meeting in Toronto, Canada. The ISSCR is an independent, nonprofit organization established to promote and foster the exchange and dissemination of information and ideas relating to stem cells, to encourage the general field of research involving stem cells and to promote professional and public education in all areas of stem cell research and application.

About Fred. H. Gage:
Gage earned his bachelor’s degree from the University of Florida and his doctorate from Johns Hopkins University in Baltimore. After research and faculty experience at the University of Lund, Sweden, he returned stateside to accept a position as associate professor at the University of California, San Diego. Gage joined the Laboratory of Genetics at the Salk Institute in 1995, where he holds the Vi and John Adler Chair for Research on Age-Related Neurodegenerative Diseases.

Gage has been elected to the National Academy of Science, the Institute of Medicine, the American Academy of Arts and Sciences and the American Philosophical Society. He is also the past President of the Society for Neuroscience and recipient of the Bristol-Myers Squibb Neuroscience Award (1987), the IPSEN Prize in Neuronal Plasticity (1990), the Ameritec Award (1992), the Metropolitan Life Award (1993), the Charles A. Dana Award for Research in Aging (1993), the Robert J. and Claire Pasarow Foundation Award (1999), the Max-Planck Research Award (1999), the Met-Life Award for Medical Research (2002), the Klaus Joachim Zulch-Preis through the Max-Planck Society (2005) and the Gregory Pincus Award (2005). He also has been honored with the Christopher Reeve Research Medal (1997), The Keio Prize (2009) and was named a Decade of the Brain Medalist by the Congress of Neurosurgeons (1993).

Gage has published more than 400 studies, which places him among the ten most frequently cited scientists of the past two decades, according to the nonprofit Institute for Scientific Information.