LA JOLLA—The National Academy of Sciences (NAS) recently announced that Salk Institute Professor Vicki Lundblad is one of 84 new members to be elected to the NAS. The election is considered one of the highest honors accorded a U.S. scientist. Lundblad’s recognition brings the number of Salk faculty elected to the NAS to 14. 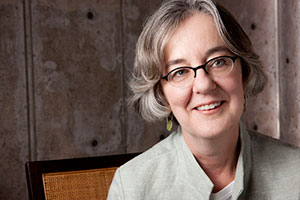 Lundblad, the Becky and Ralph S. O’Connor Chair and professor in the Molecular and Cell Biology Laboratory, seeks to understand how the ends of chromosomes determine how many times a cell can divide. Her early work showed that these chromosome termini, called telomeres, act as a cellular time-keeper, by losing DNA sequence with each cell division. Fortunately, there is a way around this countdown: an enzyme called telomerase rebuilds these eroding telomeres and allows cells to divide indefinitely. Lundblad’s group pioneered the discovery of the key subunits that make up this telomerase enzyme, using the yeast Saccharomyces cerevisiae—the same yeast used to make wine and bread—as their experimental system. This simple single-celled organism has also allowed Lundblad and her colleagues to subsequently uncover numerous insights about what dictates when and where telomerase acts inside the cell.

Lundblad’s work also laid the groundwork for comparable studies in human cells. Normal human cells have very low levels of telomerase, which limits their cell division potential. Since lungs, skin, liver and other organs must be replenished by newly divided cells, the resulting eventual block to cell division due to eroding telomeres contributes to the aging process. In contrast, greatly elevated levels of telomerase drives the unregulated cell growth exhibited by cancer cells. Recent work by Lundblad’s group has uncovered a novel mechanism that may “fine-tune” telomerase, to keep it at levels that ensure healthy cell division but are not sufficient for the rampant cell growth that characterizes cancer.