LA JOLLA, CA—San Diego Gas & Electric (SDG&E) named the Salk Institute for Biological Studies as an Energy Champion for their outstanding efforts in energy efficiency and conservation at an awards ceremony on May 10. The Institute is one of 13 local businesses recognized for “going above and beyond to save energy and money by taking advantage of the many rebates and incentives that are available through SDG&E’s energy-efficiency and demand response programs,” said Hal Snyder, vice president of customer solutions for SDG&E.

With a set of energy demands that has evolved since the campus was originally built in 1962, the Salk Institute completed an entire retrofit and expansion of their central plant mechanical and electrical infrastructure to improve overall energy efficiency, sustainability, and cost savings. “The ultimate challenge was trying to complete the full scope of the project within the confines of an historic and iconic structure,” said Tim Ball, Senior Director of Facility Services. “In addition to maintaining design integrity, changing out the entire infrastructure without interruption to the science was an endeavor in and of itself.”

The entire electrical infrastructure upgrade and new energy-efficiency measures has resulted in an annual savings of 3,000,000 kWh for the Institute. And in recognition of its environmental leadership and contribution to sustainable communities through its energy efficiency efforts the Salk also received $284,000 in incentives by working with SDG&E’s Energy Efficiency Business Incentives (EEBI) program and $974,346 California Solar Initiative incentives for a PV system consisting of more than 2,350 photovoltaic solar panels that sit on top of all four major buildings on the campus, generating 465 kilowatts of electrical power. 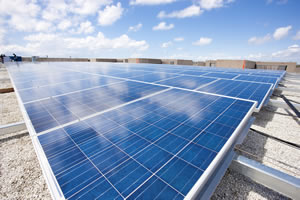 The environmental impact of the solar arrays and efficiency measures are significant; they keep approximately 846,000 pounds of carbon dioxide out of the atmosphere annually – along with nearly 800 pounds of sulfur dioxide and 1,240 pounds of nitric oxide, two of the major pollutants produced by power plants. Over the next 25 years, the solar system and efficiency measure installations will be the equivalent to planting 128 acres of trees.

“Although challenging, the opportunity to enhance this infrastructure with energy efficiency improvements was monumental, as the Salk Institute is a haven for discovery with global impact on human health,” said Ball.