“The Institute’s 50th anniversary is the perfect moment to recognize the extraordinary contributions of our medalists,” said Salk President William R. Brody in announcing the honors. “The Salk Institute medals are a fitting tribute to their ongoing, vital contributions to science and society. And our founder, Jonas Salk, would have been absolutely delighted by the medalist selection.” 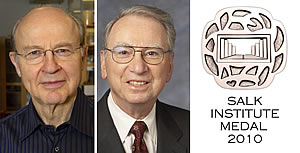 “Robert Roeder’s contributions to the understanding of RNA synthesis in animal cells are unparalleled in modern science, while Irwin Jacobs’ twin careers as a high-tech entrepreneur and a philanthropist who has improved many lives superbly captures the intended spirit of the public service medal honor,” Brody said.

Roeder, a member of the National Academy of Sciences, is internationally regarded for his work on how genes are expressed in healthy cells, and how this process breaks down in diseases like cancer. He is the recipient of the Albert Lasker Basic Medical Research Award, the Gairdner Foundation International Award, the Louisa Gross Horwitz Prize, the General Motors Cancer Research Foundation’s Alfred P. Sloan Prize, and many others.

As Head of the Laboratory of Biochemistry and Molecular Biology at Rockefeller, and holder of the Arnold and Mabel Beckman Chair, Roeder continues to probe gene expression using biochemical tools, including the cell-free system he developed to recreate cellular functions in a test tube.

In selecting Roeder to receive the Salk Institute Medal for Research Excellence, the faculty committee, chaired by Professor Tony Hunter, said: “Biosynthesis of RNA requires huge protein machines inside our cells. The identification and characterization of such a large group of proteins dedicated to the crucial task of turning on and off our genes represents the most outstanding biochemical achievement, certainly of the last 40 years.”

Jacobs, a prominent scientist and entrepreneur, is the co-founder of Qualcomm, Inc. Qualcomm developed and commercialized CDMA mobile wireless technology, now in use by more than 800 million consumers worldwide. Jacobs led the company’s growth from startup to Fortune 500 company.

Jacobs’ civic leadership and philanthropic projects have been equally outstanding. He is Past Chair of the University of California President’s Engineering Advisory Council, Chair of the Board of Trustees of the Salk Institute, and Chair of the National Academy of Engineering. His extraordinary record of philanthropy in education, science and engineering, the arts and medicine have helped many institutions, schools, universities, and deserving students. Jacobs and his wife, Joan, have made many charitable gifts, prompting Business Week and the Chronicle of Philanthropy to include the couple among the 50 most generous philanthropists in the United States.

In selecting Jacobs to receive the Salk Institute Medal for Public Service, the faculty committee, chaired by Professor Inder Verma, cited Irwin Jacobs’ prodigious accomplishments as a technology innovator who established new paradigms in telecommunications; his support of basic research and, in particular, encouragement of high-risk scientific inquiry; and his exceptional generosity in local, state, national and international philanthropic projects.

The medals will be awarded on October 29 as the concluding event of a Salk/Nature/Fondation Ipsen Symposium on Biological Complexity at the Institute (Oct. 27-29). The Symposium, organized by Prof. Verma and held in celebration of the Institute’s 50th anniversary, will feature many internationally prominent life scientists (including three Nobel Laureates and many members of the National Academy of Sciences) focusing on emerging concepts and trends in biology today.

The first Salk Institute Medals were awarded in 2006 to Donald Metcalf, an Australian physiologist whose research on cancer has improved disease treatment, and to Paul Farmer, anthropologist, physician, and co-founder of Partners in Health.

The Institute’s medals were designed by the artist, fashion designer and businesswoman Paloma Picasso, best known for her dramatic jewelry designs. She is the youngest daughter of Pablo Picasso and painter and writer Francoise Gilot, who later married Jonas Salk. Ms. Gilot is expected to attend the medals event, which is to be held one day after what would have been Institute Founder Jonas Salk’s 96th birthday.