LA JOLLA, CA—On the eve of the anniversary of the first polio vaccine, the Salk Institute was honored with a generous gift from Michael Crick, the son of the late Nobel laureate and Salk faculty member, Francis Crick.

Michael Crick will donate to the institute half of the proceeds from the sale of a 1953 letter in which Francis Crick describes to his young son his recent discovery of the double-helical structure of DNA.

“Francis Crick was for many years a deeply beloved member of the Salk faculty, who pushed himself and his colleagues to ask profound scientific questions,” said Salk Institute President William R. Brody. “The Salk Institute is enormously grateful for having had the privilege to know and work with Francis, and that Michael has chosen to honor his father’s memory in this way.”

On April 25, 1953, Crick and James Watson published a historic letter in Nature that described the DNA double helix, which concluded with the famous understatement that the structure “suggests a possible copying mechanism for genetic material.” Crick, Watson and Maurice Wilkins would later share the 1962 Nobel Prize in Physiology or Medicine for the discovery. 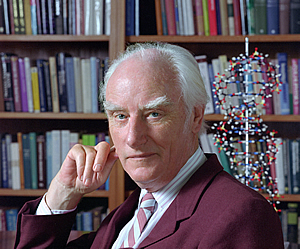 But before Crick told the world about DNA, he wrote a letter to his 12-year-old son Michael, then at boarding school. The letter was signed with paternal affection, “Lots of love Daddy,” but the contents are considered the first complete written description of the structure and mechanism of DNA, including a hand-drawn picture by Crick. Of the picture, he commented to his son, “the model looks much nicer than this.”

The model, in fact, became the basis for the entire field of modern molecular biology, enabling breakthrough insights into cancer and other diseases, a legacy carried on at the Salk Institute today.

The letter sold April 10 at Christie’s auction house to an anonymous bidder for a record price of close to $6 million. The previous record holder was an Abraham Lincoln letter that sold for $3.4 million in 2008.

After Crick reached mandatory retirement age at the Medical Research Council in Cambridge, England, he joined the Salk Institute in 1976. “The Salk allowed Francis to continue doing research for another 27 years,” Michael Crick told the New York Times.

At the Salk, Crick’s interests turned to neuroscience, where he focused on visual perception and championed research to discover the neural underpinnings of consciousness.

“His preferred way to attack a problem was to read the literature, which he knew better than most experts, and to discuss the details directly with the authors,” says his long-time colleague Terry Sejnowski, who holds the Francis Crick Chair at the Salk Institute. “On the 60th anniversary of the discovery that changed all of our lives, his curiosity and tenacity continue to inspire us all.”