The award, from the Leona M. and Harry B. Helmsley Charitable Trust, will support interdisciplinary research that paves the way to new therapies for chronic illnesses such as cancer, diabetes and Alzheimer’s disease.

“This remarkable gift reflects the strong partnership between Salk and the Helmsley Charitable Trust and their commitment that the Institute stay at the forefront of biomedical research,” said William R. Brody, Salk president. “By working together, Salk and the Trust have successfully sculpted this unprecedented grant. It will provide vital funding to enable our scientists to pursue the kinds of transformative scientific discoveries and advancements that will have worldwide impact on people’s health for generations to come. With its scale and unique focus on supporting vitally important basic scientific research, the Helmsley Charitable Trust stands among philanthropy’s vanguard in promoting innovative cross-disciplinary initiatives such as this one.” 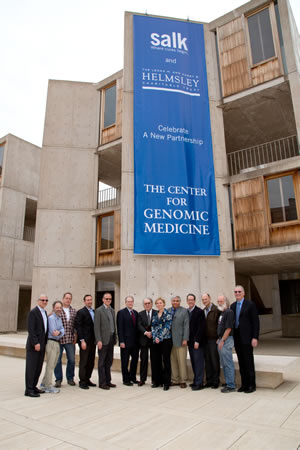 John Codey, a trustee for the Helmsley Charitable Trust, said that the Trust decided to establish the center at Salk because of the Institute’s long track record of ground-breaking discoveries and the growing need to address chronic diseases.

“Millions of people suffer from chronic illnesses, and these diseases are placing an unsustainable burden on our healthcare system,” Codey says. “The Helmsley Center for Genomic Medicine will help to address this by serving as an incubator for tomorrow’s clinical treatments and cures.”

Broadly defined, genomic medicine is the science of using maps of human DNA-the genome-to understand how cells operate and generate new therapies for human disease. The Helmsley Center for Genomic Medicine (HCGM)will allow Salk researchers to use genomic data and powerful new technologies to decipher the molecular and genetic mechanisms that go awry in chronic disease.

The center will include scientists who are leaders in a range of biomedical research fields, including stem cell biology, endocrinology, cancer biology, metabolism,neurobiology, developmental biology, inflammation, and gene therapy. They will combine their efforts to understand how certain cellular pathways serve as lynchpins for chronic diseases, such as cancer,diabetes and neurodegenerative disorders. For instance, Salk researchers are finding that the cellular pathways involved in inflammation play a role in a range of diseases, including diabetes, heart disease and cancer. This suggests that developing therapies that address inflammation could help prevent and treat a broad range of disorders.

“The scientific collaborations fostered by HCGM will far exceed
the efforts of any individual participating laboratory,” says Salk scientist Inder Verma, project leader of the new partnership between Salk and the Helmsley Charitable Trust. “The state-of-the-art core facilities made possible by this grant will offer access to technology and support that no researcher could get on their own.”

In addition to charting the common genomic basis for chronic conditions and uncovering new potential targets for therapies, the center’s researchers will explore how genomic networks control stem cell development. This will allow researchers to manipulate genes to make stem cells useful for studying disease and regenerative medicine. The center will also explore how disease alters the epigenome, chemical switches on the DNA molecule which influences genetic activity, which may explain why patients with similar genetic profiles respond differently to treatment.

“Chronic illness leads to distinctive changes at the genetic level and this gives us a new way to approach diagnosis and treatment,” says Ronald M. Evans, professor in Salk’s Gene Expression Laboratory. “HCGM will allow experts in cellular genetics and genomics to team up and seek out common molecular signatures of disease. Chronic diseases are complex, and to understand them you need to blend science, medicine and new advances in drug discovery by approaching them from different angles.”

The Helmsley Charitable Trust’s important gift is one of several major contributions made to Salk by the Trust. In 2009, the Trust issued a $5.5 million grant to found the
Salk Center for Nutritional Genomics to study nutrition at the molecular level and its impact on the role of metabolism in diabetes, obesity, cancer, exercise physiology and lifespan. The Trust awarded an additional $15 million in 2010 to create a collaborative stem cell project involving Salk and Columbia University to fast-track the use of induced pluripotent stem cells to gain new insight into disease mechanisms and screen for novel therapeutic drugs.

“Our philanthropic investment in Salk has produced tangible and impactful results, upon which this latest grant will build significantly,” says Codey. “With the Helmsley Center for Genomic Medicine we are partnering with Salk to tackle some of the most devastating diseases facing humankind.”