La Jolla, CA – The Salk Institute at a press conference today announced the appointment of Dr. William R. Brody, an acclaimed physician scientist and university leader, as the Institute’s new president. Currently completing a 12-year tenure as president of The Johns Hopkins University, Dr. Brody is renowned for his achievements in biomedical engineering and his stellar academic career. He will assume his new role effective March 1, 2009.

A member of the National Academy of Engineering and the Institute of Medicine, Dr. Brody will oversee Salk’s 870 scientific staff and direct the Institute’s research objectives. His illustrious background in both medicine and electrical and computer engineering as well as academic leadership of one of the nation’s top universities make him uniquely suited to lead Salk’s commitment to scientific excellence and innovation. 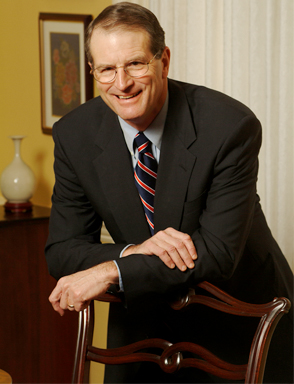 The Salk Institute announced the appointment of
Dr. William R. Brody as its new president during a press conference on Oct. 13.

“The Board and I and the entire Salk family are excited to welcome Dr. Brody, a proven leader with broad accomplishments in medical science and academia, as the new president of the Salk Institute,” said Irwin M. Jacobs, chairman of Salk’s Board of Trustees. “We have all been struck by Bill’s intellect, energy and enthusiasm and look forward to working closely with him as he leads the Institute to new levels of excellence.”

Dr. Brody is an accomplished scientist with more than 100 articles published in U.S. medical journals. He also holds two U.S. patents in the field of medical imaging. His many biomedical accomplishments include contributions in the fields of medical acoustics, computed tomography, digital radiography, and magnetic resonance imaging. He is a co-founder of three medical device companies, and served from 1984 to 1987 as president and CEO of Resonex Inc., a medical instrument manufacturer.

Dr. Brody’s academic and leadership credentials are as prestigious as his achievements in medicine and engineering. Before being named president of The Johns Hopkins University in 1996, he served as provost of the Academic Health Center at the University of Minnesota for two years. Prior to that, he held several appointments at The Johns Hopkins University School of Medicine from 1987 to 1994, including the Martin Donner Professor and Director of the department of Radiology; professor of Electrical and Computer Engineering; professor of Biomedical Engineering; and Radiologist-in-Chief of The Johns Hopkins Hospital.

Dr. Brody has also been a national figure in efforts to encourage innovation and strengthen the U.S. economy through investments in research and education. Over the past year, he also has written and spoken extensively around the country to promote a fuller discussion of health care reform in the presidential election campaign.

Dr. Brody said: “I am excited to come to the Salk Institute, one of the true jewels in the crown of biomedical science, known for its renowned scientists. I hope to help the Salk faculty chart a course for the future, incorporating many of the exciting new disciplines and technologies that contribute to advances in medical science. Located as it is in the heart of innovative biotechnology companies and research institutes gives the Salk a unique advantage to forge creative partnerships such as the Sanford Consortium for Regenerative Medicine. In addition, I look forward to working with the Salk Board of Trustees to increase the financial base of support that is so important to recruiting and retaining top scientific talent.”

He continued his post-graduate training in cardiovascular surgery and radiology at Stanford, the National Institutes of Health, and the University of California at San Francisco. The Canadian Association of Radiologists recognized Dr. Brody’s contributions by making him an honorary member in 1974. He’s also the recipient of the Outstanding Alumnus Award from UC San Francisco’s department of Radiology; the American Heart Association’s Established Investigator Award; and the Western Thoracic Surgical Society Prize Manuscript Award.

The Salk Institute for Biological Studies in La Jolla, California, is an independent nonprofit organization dedicated to fundamental discoveries in the life sciences, the improvement of human health and the training of future generations of researchers. Jonas Salk, M.D., whose polio vaccine all but eradicated the crippling disease poliomyelitis in 1955, founded the Institute in 1960 with a gift of land from the City of San Diego and the financial support of the March of Dimes.