LA JOLLA, CA—A collaborative paper by John A.T. Young, Ph.D., Nomis Foundation professor at the Salk Institute for Biological Studies and Sumit Chanda, Ph.D., associate professor at Sanford-Burnham Institute, has been identified by Science Watch® as the most-cited paper in the category of Molecular Biology & Genetics and is currently featured as a Fast-Moving Front paper on their website. 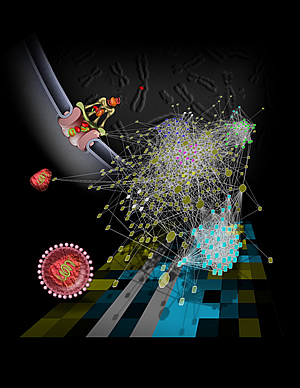 The human immunodeficiency virus (HIV) only brings along a minimalist’s survival gear – just nine genes, coding for 15 proteins – and relies on its host cell to provide what’s missing.

The study combined several layers of genome-wide analysis and identified 295 host cell factors proteins that aid the virus in establishing an infection and, for the first time, provided a physical and genetic map of host-pathogen interactions that are required for a virus to replicate in a host cell. Their study could lead to the development of a new class of HIV therapeutics aimed at disrupting the human-HIV interactions that lead to viral infection.

“This was one of the first studies to combine genome-wide RNAi screening and bioinformatics to identify the range of host cellular factors that help facilitate HIV replication in human cells,” said Young, who heads the Nomis Center for Immunobiology and Microbial Pathogenesis. “It represents a significant advance in our understanding of viral-host interactions by providing a blueprint of the machinery that is exploited by the virus. This information provides a clearer understanding of the many ways that our cells contribute to HIV replication and also suggests new approaches for developing antiviral treatments.”

Science Watch®, produced by Thomson Reuters in Philadelphia, creates a picture of the state of a specific research area by looking at the papers that constitute its core of seminal work.? Research areas in science, particularly those at the cutting edge of their fields, are characterized by patterns of intense communication between scientists. This communication manifests itself in various ways, both formally and informally, but prominent among these are citations of one scientist’s work by another.

By identifying the most-cited papers within a discipline over a sliding six-year period, and then determining how often these papers have been jointly cited, a set of core papers emerges. Fast Moving Fronts are those having the largest percentage increase in number of core papers from one period to the next in their respective fields.

About Sanford-Burnham Medical Research Institute
Sanford-Burnham Medical Research Institute is dedicated to discovering the fundamental molecular causes of disease and devising the innovative therapies of tomorrow. Sanford-Burnham, with operations in California and Florida, is one of the fastest-growing research institutes in the country. The Institute ranks among the top independent research institutions nationally for NIH grant funding and among the top organizations worldwide for its research impact. From 1999 – 2009, Sanford-Burnham ranked #1 worldwide among all types of organizations in the fields of biology and biochemistry for the impact of its research publications, defined by citations per publication, according to the Institute for Scientific Information. According to government statistics, Sanford-Burnham ranks #2 nationally among all organizations in capital efficiency of generating patents, defined by the number of patents issued per grant dollars awarded.