LA JOLLA, CA—On the eve of the 60th anniversary of the discovery of DNA, James Watson, a legendary scientist who helped changed the history of molecular biology, spoke at the Salk Institute about his recent work in cancer research.

In 1962, Watson shared the Nobel Prize in Physiology or Medicine with long-time Salk Institute faculty member Francis Crick and Maurice Wilkins of King’s College, London, for describing the double-helix structure of DNA, a discovery that laid the cornerstone for modern molecular biology. The fourth scientist who contributed to the discovery, Rosalind Franklin, had died of uterine cancer before the prize was awarded. 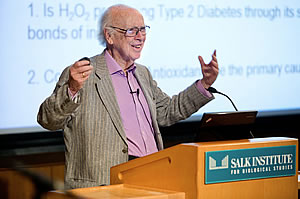 In 1968, Watson, currently Chancellor Emeritus and the Oliver Grace Professor of Cancer Research at Cold Spring Harbor Laboratory, became as well-known for The Double Helix, his bestseller describing their quest, as for the discovery itself.

“Watson is the most famous scientist in the world,” said Ronald Evans, holder of Salk’s March of Dimes Chair in Molecular and Developmental Biology, who introduced Watson’s lecture by mentioning that he’d just asked Watson to autograph his own hardbound copy of The Double Helix.

Watson’s ties to La Jolla go beyond his collaboration with Crick. He and his wife Elizabeth, whom Watson describes romancing in his sequel Girls, Genes and Gamow, were married here, and have returned often for anniversaries.

Despite Watson’s reputation as a memoirist, his talk, entitled “Oxidants, Anti-Oxidants, and Incurable Cancers,” centered on the present and future of cancer research. Elsewhere, he has described his research on cancer as “among my most important work since the double helix.”

He is skeptical of the fad for anti-oxidants, believing that in certain situations they may encourage cancer to spread. His thesis is: Molecules called “reactive oxidant species” (ROS) are important for inducing programmed cell death. This is actually desirable in the case of damaged cells, however, unchecked ROS can destroy healthy proteins. This is why people think it’s good to eat anti-oxidants like blueberries—anti-oxidants neutralize ROS, thus allowing healthy cells to thrive. According to Watson, the problem is, when you have cancer, you obviously don’t want cancer cells to live, thus, consuming anti-oxidants may be counter-productive.

James Watson played to a standing-room-only crowd in the Frederic de Hoffmann Auditorium.

Throughout his talk, Watson presented a provocative set of questions based on his review of the literature on cancer, especially studies on metformin, known as a diabetes drug, which he has been taking to keep his prostate cancer in check. At one point, his lecture nearly turned into a private discussion between himself and Reuben Shaw, an associate professor in Salk’s Molecular and Cell Biology Laboratory and researcher in the Institute’s new Helmsley Center for Genomic Medicine.

Last February, Shaw published a paper in the journal Cancer Cell, that showed that phenformin, a derivative of metformin, decreased the size of lung tumors in mice and increased the animals’ survival.

Watson and Shaw both agreed that the basic research to fully understand metformin’s potential as a cancer drug will only come from academic science. Joking with Shaw, Watson added, “Unfortunately, for Cold Spring Harbor, you didn’t accept our job offer!”

In his closing remarks about potential therapeutics, Evans, who has helped to spearhead Salk’s efforts on metabolic diseases and aging research, said, “Most Americans are under-exercised.” By contrast, the nearly 85-year-old Watson is a testimony to healthy aging as he kept joking with the audience about his continuing passion for tennis, “I play singles against 25-year-olds—even 20-year-olds! They respect me by only hitting the ball at about three-quarters of the court. I’ve exercised strenuously for the past twenty years. If I hadn’t, I probably wouldn’t be giving this talk.”