LA JOLLA, CA—Frederick B. Rentschler, 70, a corporate leader and longtime Salk Trustee who served as Chairman and Vice Chairman of the Board, and briefly as Salk Chief Executive Officer, died July 6 in Scottsdale, AZ.

Salk colleagues expressed deep sadness at the news of his passing, observing that he was a great friend to the institute, providing his generous support and leadership when it was most needed.

“Fred loved the institute, loved the faculty and loved to be around the science,” said Prof. Inder Verma. “He was a friendly, warm, big bear of a man.”

“He was generous with his time and when we needed his leadership he provided it,” said Prof. Fred Gage. When Rentschler served as Salk CEO, he would fly in to San Diego on a weekly basis. “We were grateful to Pam (his spouse) for allowing him to do this. It was a sacrifice.” 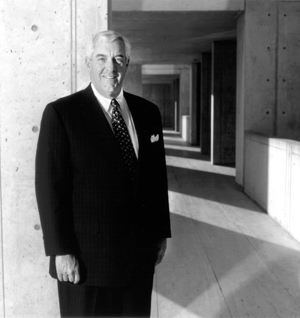 A memorial service is set for 11 a.m. July 17th at St. Patrick’s Church in Scottsdale.

During his highly-successful business career, Rentschler was the President and CEO of the Beatrice Companies, Northwest Airlines, and Hunt-Wesson. A native of Cincinnati, he earned a B.A. in Economics and History from Vanderbilt University, and an MBA in Marketing from Harvard Business School. He was a Captain in the U.S. Marine Corps in the 1960s and served as Deputy Director of the White House Fellows Program in the 1970s.

Rentschler, who with his wife, Pam, split their time between cattle ranching in Cameron, Montana and a home in Scottsdale, AZ, provided nearly 20 years of service to the Institute. His relationship with the Salk began in 1986 when he joined the International Council. In 1988 he joined the Board of Trustees, serving until November of 2005 when he stepped down and became a Trustee Emeritus.

During a period of leadership transition, Rentschler served as the Salk’s CEO, his large frame and booming voice a major presence in the Institute’s North Tower. “He was a former Marine, and occasionally had the personality of a Marine,” recalled Verma. “He was passionate about Salk science and was always happy to be around here.”

“He was in command of every situation and knew instinctively the right thing to do,” agreed Salk CFO Kim Witmer. “Fred really connected with the science and the Salk mission.”

Rentschler’s legacy to the Salk included sponsoring the Institute’s first developmental chair, saying it gave him great pleasure to help advance the careers of young scientists. (The Frederick B. Rentschler Developmental Chair is currently held by Lei Wang.)