LA JOLLA—Reuben Shaw, a member of the Salk Institute’s Molecular and Cell Biology Laboratory and a Howard Hughes Medical Institute early career scientist, has been promoted from associate professor to full professor.
After a rigorous evaluation process by Salk senior faculty, nonresident fellows and scientific peers, the promotion was announced Friday.

“We are pleased to recognize Professor Shaw’s original, innovative and notable contributions to biological research in pathways that underlie the development of cancer and metabolic disorders,” says Salk President William R. Brody.

While investigating one of the most commonly mutated genes in lung cancer, Shaw discovered an energy-sensing pathway that shuts down cell growth and reprograms metabolism when nutrients are scarce. His lab went on to molecularly decode a number of new components of this biochemical pathway, which connects nutrition and exercise to suppression in both cancer and diabetes. 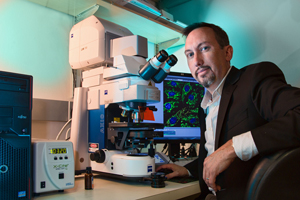 This biochemical circuit, the AMPK pathway, is activated by exercise and caloric restriction and serves to tell cells to lower their glucose, lipids and cell growth. This pathway halts the growth tumor cells, which have aberrant revved-up metabolism, but also acts to restore normal function to the liver and other tissues in diabetics. Shaw’s lab followed up on a prediction from its previous studies to recently test whether drugs widely used to treat type 2 diabetes could work as cancer treatments. The team found specific efficacy in some forms of lung cancer for which there are currently no good therapies.

In addition, researchers in Shaw’s lab use genetic mouse models to further examine the connections between cancer and metabolic diseases, and to tease out the precise role of each component of the signaling pathway. In the past five years at Salk, the lab’s studies have lead to the discovery of new therapies for both cancer and type 2 diabetes.