“We have the chance to improve the lives of not just millions, but billions of people on this planet,” said the president, “It will require us to embrace the spirit of discovery that made America—America.” 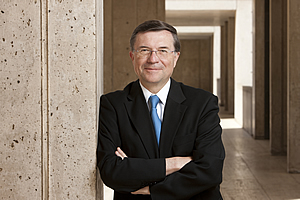 In his introductory remarks, National Institutes of Health Director Francis Collins, dubbed Obama the “Scientist in Chief,” and said, “Asking the people in this room to delay innovation would be like asking the cherry trees to stop blooming.”

Obama compared the BRAIN Initiative to the Human Genome Project, which mapped the entire human genome and ushered in a new era of genetics-based medicine. “Every dollar spent on the human genome has returned $140.00 to our economy,” the president said. Instead of charting genes, BRAIN will help visualize the brain activity directly involved in such vital functions as seeing, hearing and storing memories, a crucial step in understanding how to treat diseases and injuries of the nervous system.

The BRAIN Initiative is launching with approximately $100 million in funding for research supported by the National Institutes of Health (NIH), the Defense Advanced Research Projects Agency (DARPA), and the National Science Foundation (NSF) in the President’s Fiscal Year 2014 budget.

Foundations and private research institutions are also investing in the neuroscience that will advance the BRAIN Initiative. Along with the Salk Institute, they include The Allen Institute for Brain Science, the Kavli Foundation, and The Howard Hughes Medical Institute.

“This initiative is a boost for the brain like the Human Genome Project was for the genes,” says Sejnowski, the Francis Crick Chair and head of the Computational Neurobiology Laboratory at Salk. “This is the start of the million neuron march.”

The BRAIN initiative and its focus on leveraging emerging technologies dovetails with the Salk Institute’s Dynamic Brain Initiative, a neuroscience initiative focused on providing a better understanding of the brain, spinal cord and peripheral nervous system. The Salk Institute itself is home to several pioneering tool builders, among them Edward M. Callaway, already famous among systems neuroscientists for using a modified rabies virus to trace neuronal connections in the visual system.

“Scientists have known since the time of Galileo that new tools can open up whole new lines of research,” says Callaway, holder of the Audrey Geisel Chair in Biomedical Science. “But for us, tools aren’t just mechanical instruments, they can be viruses, genes, chemical dyes, or even photons.”

Tools are also mathematical, explains Sejnowski. “When you are trying to understand the electrical and chemical interactions of millions of brain cells, you are looking at a multi-dimensional problem, which can only be solved by computational modeling,” he says. “My lab has as many mathematicians and physicists and engineers as it has biologists.”

Summing up his excitement over the promise of BRAIN, Sejnowski says, “Imagine how it must have felt to be a rocket engineer when Kennedy said we would reach for the moon. You know there’s an almost unimaginable amount of hard work ahead of you—and yet you can’t wait to get started.”

The initiative builds on discussions between a group of leading neuroscientists and nanotechnologists from around the country, including Sejnowski. The scientists published an article on the topic in the March 15 issue of Science, in which they noted that the Human Genome Project yielded $800 billion in economic impact from a $3.8 billion investment—and that a similar neuroscience initiative could expect to produce similar returns.

President Obama emphasized the impact of the genome-mapping project in his February 2013 State of the Union address and the importance of neuroscience for addressing human diseases. “Today, our scientists are mapping the human brain to unlock the answers to Alzheimer’s,” he said. “Now is the time to reach a level of research and development not seen since the height of the Space Race.”

Sejnowski says BRAIN could ultimately help reduce the overwhelming costs for treatment and long-term care of brain-related disorders, which Price Waterhouse Coopers estimated at $515 billion for the United States alone in 2012.

“Many of the most devastating human brain disorders, such as depression and schizophrenia, only seem to emerge when large-scale assemblies of neurons are involved,” says Sejnowski. “Other terrible conditions, such as blindness and paralysis, result from disruptions in circuit connections. The more precise our information about specific circuits, the more we will understand what went wrong, where it went wrong, and how to target therapies.”

Computational neuroscience focuses on understanding how a circuit of hundreds to thousands of brain cells, which includes neurons, as well as associated cells, such as astrocytes, allows us to do something as simple as reaching out a hand or as complex as processing rich visual information. The only way to fully understand systems, such as olfaction or vision, is to map and probe the entire circuit, which is exactly what the BRAIN proposes to do.

“We’re not jumping in and mapping the entire active human brain,” says Sejnowski, “But we are at a point where we can develop the tools to map entire circuits, first in invertebrates and eventually in mammals.”

In fact, part of the reason that the neuroscience field is now gaining momentum is that advances in engineering and physics are allowing scientists to develop incredibly tiny tools to explore the molecular world of living cells. It is no accident, says Sejnowski, that the Science paper included a cadre of nanotechnology pioneers as coauthors. “It’s like wishing for a faster car, and finding out that engineers from Bugatti and Lotus are offering to help,” Sejnowski says of the cross-disciplinary collaboration.

New tools that will be developed under BRAIN will push the cutting-edge even further, enabling scientists to look at the brain with better spatial and temporal resolution, as well as analyze the millions of bits of accumulated data.